Sonique is both a singer and a DJ who is into electro, house, dance and pop music either by singing it or playing it

Sonique is a singer and a DJ, her recorded music style fits in the categories of Pop and Dance but as a DJ she plays and presents House, Progressive and Electro music styles. Born in London in 1968 she joined her first band 17 years later and went on to develop skills writing and recording songs, joining S'Express for the release of their second album.

Her first appearance as a DJ was in 1994 after honing her skills with her mates, also DJ's, during the early 90's. She then became the resident DJ of Swankey Mode in January 1995 setting her course in music from then on in as both singer and DJ.

Developing both aspects of her career she got to top the charts in many countries around the world and also became a top DJ being resident in Ibiza for a couple of years but also working as a guest DJ in some of the best clubs worldwide, a true talent in either respect.

Her 3 solo albums are included below.

For information, Sonique was being treated for cancer having being diagnosed as having cancer in June 2009 but I am glad to report that she has recently been given the all clear and we can now hopefully see her getting involved with music again and returning to what she does best.

She celebrated the all clear by appearing on a cover version of the Cyndi Lauper song 'Girls Just Want To Have Fun' which was released to raise fund for the Cancer Research UK charity. Her single "World of Change" was released on 23 October 2009 and the official video was posted by Sonique's label on youtube.2011- This brought the release of the ZYX album "Sweet Vibrations", which contains the previously released singles: "Better Than That" and "World of Change".

I have decided that 100% of any royalties being made from this lens will now be donated to cancer research, hope you can find it in you to make a purchase or contribute in some way to getting rid of cancer so that less people have to go through the trauma of this disease,

My family has been touched by this illness in the past and it is a very trying time that no one deserves to go through. Give generously where you can, you may also want to check out Raising Funds for Clic Sargent

By the way if you like the idea of creating your own single page website like this then all you have to do is click on I want to make my own Hub, you can of course dedicate any money made to a charitable cause if you wish. 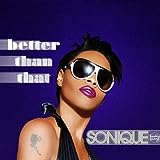 UK's leading female DJ, and guested at clubs all over the world with her unique brand of DJ and vocalist.

Born to be Free

Quick, so what do you think of Sonique?

It Feels So Good - Sonique at the Brit Awards

Go to Soniques Official Website on MySpace for more information and photographs. 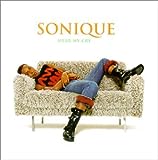 Hear My Cry
A pair of uptempo, minor-key tunes kick off this Brit diva's debut CD. The catchy opener, "It Feels So Good," recalls both '80s freestyle and Cher's wildly successful hit single "Believe." The next track, "I Put a Spell on You," is "inspired by" (as the CD's sleeve puts it) Screamin' Jay Hawkins's classic R&B gem of the same name. The new version has none of the 1956 original's over-the-top sense of absurdity and abandon; Sonique's "Spell" is...
Buy Now

You can find the Official MTV Sonique Fan Page right here with more photos and news.