How Does It Measure Up? Tim Burton's Alice in Wonderland Rated

Alice in Wonderland was most certainly one of the most anticipated movie releases of 2010 and arrived in theatres on March 5, 2010 in three formats, Disney Digital 3-D, IMAX 3-D and 2-D. It was released on blu-ray and DVD on June 1st of the same year.

This movie, Disney's latest Alice in Wonderland, generated plenty of discussion and people tended to either love it or hate it. Personally, I think Tim Burton's version was beautifully filmed and the plot a little weak but you will have to read on to decide whether or not you want to add this movie to your movie collection.

On the plus side, the blu-ray release has received extremely positive reviews like "'it's a cinematic gift of unparalleled power" from High-Def Digest and "the tech specs on this blu-ray are superb - a vivid picture, pristine sound" from Blu-ray.com.

If you are wondering how it measured up, you have come to the right page. This page will give you lots of information about what people, movie experts and ordinary folk like you and I, thought of the movie. You will also find information about what people thought of Alice in Wonderland on blu-ray, be able to watch the movie trailers and have the opportunity voice your opinion. Did Tim Burton's Alice in Wonderland live up to our wishes or did it let you down?

Click here to order your copy of Tim Burton's Alice in Wonderland from Amazon.

Fast Facts About Tim Burton's Version of Alice in Wonderland

Disney: Alice in Wonderland (Based on the motion picture directed by Tim Burton)
Buy Now

Tim Burton's Alice in Wonderland, The Story In 100 Words Or Less

Tim Burton's version of Alice starts AFTER the young Alice went down the rabbit hole. In this movie, Alice is 19 years old and attending a party at a Victorian mansion that turns out to be an engagement party for HER engagement, something she wants no part of. She takes off following the White Rabbit down the whole again to Wonderland which is really called Underland. The Red Queen has overthrown her sister, the White Queen, and things are not well in Underland. The creatures including the Cheshire Cat, Tweedledee and Tweedledum and the March Hare, are all awaiting the return of Alice so that she can save their world. Alice works with the White Queen, the Mad Hatter and the Caterpillar to save Wonderland.

Click here to see the complete selection of Alice in Wonderland posters available from Amazon.

What fan would not love this Disney Parks Disney's Alice in Wonderland Tote Bag by Loungefly? I love it. How about you?

Tim Burton Alice in Wonderland Cast of Characters - Residents of the under world. 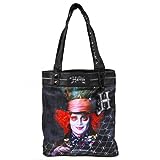 Tim Burton Alice in Wonderland Cast of Characters - Residents of the real world.

I agree exac-a-tactly with Paul Young of screenrant.com when he says,

"...I'm a big fan of almost everything that involves Tim Burton and Johnny Depp. Burton has a dark, almost "Poe" like story telling ability that I really enjoy - and I don't think there is any actor alive today that can rival the ability Depp has in bringing a unique quality to each character he plays."

What The Experts Have To Say About Tim Burton's Alice in Wonderland - The results really are a mixed bag.

This Alice in Wonderland takes place in a different world, one at war between the Red and the White Queen. Alice is a heroine but not quite strong enough and Helen Bonham Carter steals the show as the hilarious Red Queen. Johnny Deep brings energy and adds a second human character to the mix. In summary, IGN felt that this movie is a case with the parts greather than the whole. An entertaining movie but not what it could have been. Read IGN's complete movie review by clicking right here.

An Excellent Alice in Wonderland Youtube Review by Jeremy Jahns

A excellent, high octane review but be warned that it is full of language and attitude. The movie may be okay for children of a certain age but you do NOT want to show them this review and while I like Jeremy's review and approach, it is definitely NOT suitable for all. If you are easily offended by language and such, I advise against watching this video review.

In case you do not want to watch the video but are curious, Jeremy said that he likes this movie a lot more than he thought he would and that it is definitely worth a family night out. (If your children are old enough.) If you are one of those who have been waiting and waiting for this movie, however, you may be disappointed.

Called a family movie by many, please consider the following before taking your young children to see this movie.

In Canada, the new movie version of Alice in Wonderland is rated PG, a rating with which I agree. PG means, "Parental guidance is advised. Theme or content may not be suitable for all children." This film is not suitable for young children as it features scary images including monsters, wounds, a severed dragon head, a gouged eye, violence which includes chasing, sword fighting, beheading and more. The Movie Mom recommends it for children in grade four and up, which seems reasonable to me. There are definitely parts in this film that young children might be disturbed by. Think carefully before you take yours.

I cannot help but wonder what causes this infatuation we have with all things Alice.

Why are you interested in Tim Burton's Alice in Wonderland?

that this Lewis Carroll classic

the rabbit hole before.

But never with a guide

quite as attuned to the fantastic

How do you think Johnny Depp looked in this film?

Order Your Copy of Tim Burton's Alice in Wonderland From Amazon

You'll find this movie on Amazon where it is nicely discounted and eligible for FREE shipping on orders of $25 or more. Of course, it is available in a multitude of formats including blu-ray disc, DVD and instant video.

Another option is this Amazon exclusive package that consists of the movie in Three-Disc Blu-ray and DVD Combo with a Digital Copy plus a framed film cell.

An excellent gift choice for fans of Alice in Wonderland who already owns the movie.

My Final Thoughts on Disney's Alice in Wonderland

Personally, I enjoyed Tim Burton's Alice in Wonderland. It was an amazingly beautiful film with some pretty fantastic visuals. I thought Alice was well played, the Red Queen, amazing and Johnny Depp, entertaining. However, it doesn't rank as one of the best films I have ever seen and therefore, it will not make my list of favorite movies.

Having said that, I did enjoy it and am willing to give it a 3 out of 5 which seems to be in line with many but not all reviewers. Some reviewers rated it lower and some rated it higher. Our local newspaper (which does a pretty good job generally of rating movies) gave it 3 stars. The Movie Mom, rated it B+. It was an entertaining movie and would make a fun family outing to the movies. Just make sure your family is old enough considering the content of this film.

Anyway, that's my two cents worth, now it is your turn. What do you think of Tim Burton's Alice in Wonderland? If you have seen it, did you like or dislike it? If you have yet to see it, is it on your list of movies to see? Was this page helpful in making a decision?

What do you think of Tim Burton's Alice in Wonderland?