Being a mum is an adventure with a steep learning curve! I'm expecting baby number two, so I'm reviewing and sharing my experience so far.

I will start my review with two massive admissions. A) I am not actually an avid reader of parenting books. I've always taken the view that my instincts would take over and I would develop a sense of the right thing to do. However, around the time my son was a year old, somebody I really trusted recommended this book to me and I found it hard to put it down.

B) I wouldn't normally start a review praising the work I'm reviewing before going through it's strengths and weaknesses but this communication manual is, in my opinion, more than just a parenting book. I would say the lessons taught in this book can be applied in just about any conversation.

The title is certainly attention-grabbing and holds great promise. When the childless think of communication issues between parents and children stroppy teenagers might come to mind first but good communication skills are so important from an early age.

It's no secret toddlers often have meltdowns and these tend to happen fairly often in public. Obviously communication can still be tricky at such an early age and maybe this is the reason Faber and Mazlish have chosen "Helping Children Deal With Their Feelings" as their first chapter.

I don't want to give too much away but the point they make in this first chapter (and it really resonated with me) is that often (and I think every single person in the world, me included, has at least done this on one occasion) parents and caregivers deny their child's feelings. Your child might try to communicate a certain need but at times we tell ourselves and them that they are wrong. The authors use several examples of this and explore why a parent might react this way. It's certainly something that I have both experienced/witnessed myself and as Faber and Mazlish indicate often it's really innocent on the grown up's part. Take the old "put your jacket on"-argument that takes place in countless households on a daily basis. Just because I feel cold doesn't necessarily mean my child perceives it in the same way. So rather than going round and round in circle telling a child over and over again that they should just put a warmer jumper on already while they start throwing themselves to the ground, the book suggests how you can adjust what you might normally say.

The method Faber and Mazlish suggest is simple: acknowledge what your child is feeling and take it from there. Does it prevent tears in every situation? Maybe not. But what's more important is how it will make your child feel. 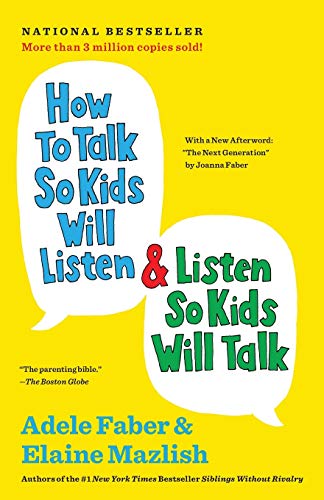 The second chapter focuses on that biggest of all battle-grounds at home: getting children to help out more. All too often we as parents find ourselves asking for the same thing to happen multiple times and this is when we start to struggle with our feelings.

For me, this chapter really hit home. In my own childhood my mother tended to not communicate what help she would have liked which then led to outbursts of anger on her part and a feeling of constantly being wronged on mine. It was a vicious circle that made chores a much bigger issue than they needed to be and it was always important to me not to one day put my own children through this experience.

Faber and Mazlish have listed examples of where parents might go wrong. What I really appreciate is that they don't accuse, they just acknowledge that parents might have fallen into the traps of trying:

I think that parents probably have all discovered that the above don't really work, yet we often jump from one of the above to another because we don't know what else to try. The authors suggest that if you want your child's help, describe what the problem is you need help with and give information as to why it needs to happen. For example, rather than getting into an argument because the milk is out of the fridge, Faber and Mazlish recommend saying something along the lines of "I can see the milk is still sitting out on the table. Milk goes off if it's not refrigerated". In case that this does not yield an instant result, it should be followed up with a brief reminder ("The milk!").

And because there are instances where children still are too distracted to jump into action, the next step would be to tell them how it makes you feel. Maybe something along the lines of "I get frustrated when I have to remind you of the milk".

Lastly, the authors suggest that if the message is not sinking in for whatever reason, to leave a little note for your children. That's not something that I have tried myself yet. Partly because my toddler can't read yet and partly because when I apply the previous steps, I tend to get results - maybe not straight away, because let's face it, sometimes he just is too wrapped up in the moment, but generally he is a brilliant helper. Am I just lucky? Could be, after all, I have no comparison as of yet but I like to think that applying the methods in the book have had something to do with it.

Faber and Mazlish have a very clear opinion on praise & punishment: that they don't work.

As far as praise is concerned, they argue that "well done" is a hollow statement that might shut a conversation down rather than start one. Instead, they offer alternatives that open up a conversation. When admiring a piece of art, rather than saying "Lovely picture" their advice is to start picking up on little details that show you are engaging with the picture you are holding. Something along the lines of "I like the purple spots on the orange circle" might actually get you a bigger smile and then prompt your child to explain why he/she chose those colours.

The book doesn't recommend punishments and instead focuses on natural consequences. If your child breaks something that was really important to you, telling them they will not watch TV again for the rest of the year is potentially out of proportion and really hard (if not impossible) to enforce. Instead, the recommendation would be for them to clean up the mess, or even pay for the repair (if possible).

Language is such a powerful tool that can manipulate grown ups and children. One of the most interesting chapters in this book, at least in my opinion, is how the language we use when talking to our children can push them into certain roles.

This is certainly something that I have experienced in my own childhood. In my family we had "the responsible one", "the one to worry about", "the rebel" and "the baby". The role of "responsible one" happened to be my own and the words relatives used to describe me always tended to push me into that direction. I was "the helper", "reliable", "so grown up"...and in a way, I had heard those descriptions so often that my behaviour more often than not was in accordance with them. It did, in a way, set me up for a trajectory where I ignored what else made up my personality, like creativity, being a bit unconventional...

I would certainly recommend this chapter to anyone - it will not only open your eyes to the way you talk to your children but also how others talk about yourself.

It's probably no surprise but I whole-heartedly would recommend this book to anyone. As I said above, if you apply the methods in this book, you will not necessarily only do so when talking to children but will apply them to other people in your life, too.

From my personal experience, I can say that staff at my son's nursery have told me many times that he is very advanced at describing his feelings. I think this is solely due to the fact that we have applied the lessons learned in the first chapters of this book and acknowledge his own feelings as well as our own.

To conclude, I would say that every now and then you pick up a book without any great expectations but then it totally captures you and stays with you. For me in the parenting guide world, this is "How to talk so kids will listen & listen so kids will talk". There is a reason this book has been around since 1980.......