Forever Grateful or Forever Lost? Adopted Bipolar and Happy With my Dutch Family

"So where are you from?" The typical question you get when people meet you for the very first time. In Spain, where I live right now, I tell them I'm from Holland. And I am. I have a Dutch Passport and my native language is Dutch.

"You don't look Dutch at all." And I don't. I was adopted when I was nine months old. An orphan I was, waiting for my new Dutch parents, somewhere in Bogotá, Colombia. I was sick like most of the babies at the orphanage.

Medical care was lousy and still is. It was all about survival of the fittest. The weakest babies died before celebrating their first year. I didn't. I wanted to live.

The bonding process with my biological mother has never had a chance. I'm not sure what the impact has been on my adult life. I don't feel abandoned by my biological parents and I can't remember hating them, for leaving me behind.

My Dutch parents told me from the age of four that I was adopted. To me it was a fun thing to know. I was different. I had something the other kids in my class didn't have. My skin color wasn't the pale one, my parents had. I was proud for being that special girl. The one with different parents. It made me feel good.

Then when I got older, puberty made things complicated. I suddenly felt extremely lonely. I didn't fit in nowhere. I was insecure and my self esteem was low. Depression got a hold of me although I never went to a doctor. My parents assumed it had to do with puberty in general and the fact that I might be struggling with my identity. I never felt that way. I knew there was something wrong, but I could never guess how my life was about to be turned upside down.

I was diagnosed with Bipolar Disorder when I was 23. It all fell into place. The depressions, the mood-swings, the extreme behaviour and the problems I had with my adoptive parents. The fights we'd been having and the misunderstandings, which made me feel completely alone in my struggles as an adolescent and later on in life.

In the midst of my twenties, my parents saw a mentally ill, Latina woman, looking quite different from the future daughter they had in mind. Very ill and very lonely I was, but I finally reached some stability after six long and exhausting years. By that time, I had cursed my adoptive parents more than a million times, trying to make them feel as lousy as I did. For years in a row, I felt so ashamed, for having cursed my parents and for having hated them so much. Bipolar Disorder is a bitch for most of us and can indeed destroy lives. In our family it almost did.

Love in Her Heart

Forever grateful I am, to the parents that raised me. They taught me so much about life and even more important.....they gave me their unconditional love. The fact that they couldn't have children of their own, maybe made them more committed to their role as a parent.

When picking me up at the orphanage in Bogotá, they couldn't have known about my Bipolar Disorder, hidden somewhere in my DNA. A serious mental illness that would test their love for me, until the bitter end. I wished for many times they didn't have to go through all that, but life somehow likes to test us human beings.

Such as my biological mother was too. A human being, love in her heart for the little girl she gave birth to. Forever grateful I am to her and my biological father, for having given me the opportunity, to live a life with so much more quality and chances, in order to develop myself into a happy, balanced and strong woman, always determined enough to reach new goals in life. 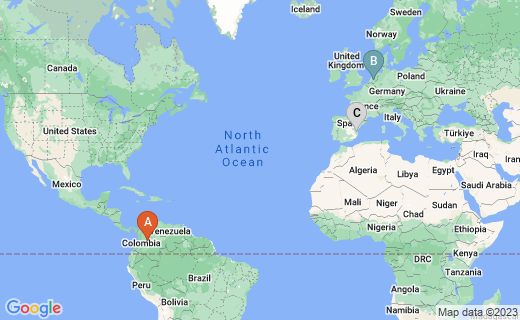 Where I was born

B
The Netherlands:
Nederland

Where my adoptive parents were born

Where I live currently

A Birthmother Has Three Options. One of Those Is Abortion. Mark Was Adopted and Tells You Why He's Forever Grateful.

Most parents being able to give up their precious baby, must be doing this out of an enormous amount of unconditional love. True, mine were just 17 and 18 years old. Still in school and not in the position of raising a child, but it must have been tough, leaving their baby-girl behind.

Somehow I hope for adoptive children to see, there is more to being adopted than just you. Mostly when adoptive children start a family of their own, they suddenly start to think differently. Or they feel even more abandoned, or they see how difficult it must be, to leave your child in the hands of some strangers.

How to feel when you're adopted, is of course extremely personal. No one can dictate how you should feel, nor can anyone dismiss those feelings, however I seem to be an exception to the rule. My adoptive brother, also from Colombia, and friends I have, who are adopted like me, appear to be haunted by that basic feeling of being left behind by their biological parents.

Forever lost they seem to be, looking for answers, fighting their demons, in order to gain some peace in what they call....that cruel reality. Left behind, thrown away, not important, forever lost. What's it like to feel that way and how come I have never felt like that? Why am I forever grateful, honestly happy and completely satisfied? Even more interesting....Why haven't I searched for my biological parents yet? How come I have never looked for my roots?

Answers I will find, knowledge I will share in part two of my memories as an adoptive child.