With the new school year looming in the (very near!) future, I have been considering school supplies for my children. I have three children, two who utilize their right hand and one who uses her left hand. According to Lance (2005), approximately 10% of the world’s population is left-handed. Obviously this puts them in the minority! Having a left-handed child has made me more aware of the difficulties faced by left-handed children and adults in a right-hand dominant world. In addition, I have worked with students as a therapeutic staff support (or wrap-around as they used to be called) who were left-handed and I saw them struggle in the school environment with typical classroom materials such as spiral-bound notebooks, scissors, rulers, pencil sharpeners and desks. In physical education, there were differences in using materials or stance which was often not addressed by the teacher unless I pointed out that a child was left-handed (however, it is noted that left-handed athletes can be very successful: Tim Tebow, NFL quarterback).

Negativity around using the left hand

Historically, left-handedness has been cast in a negative light. For example, according to Kalafut (2008) centuries ago, the Catholic Church declared left-handed people to be “servants of the devil” and left-handed people would be forced to use their right hand (we have all heard stories about the Catholic school nuns using rulers to crack the knuckles of a left-handed student!). In addition, she indicated that various other cultures have similar beliefs regarding the use of the left hand. Even in language the left is described negatively. For instance, the Anglo saxon word lyft meaning "weak" is where the word left comes from. However, not all uses for the left hand are seen negatively. In Buddhism the left represents wisdom.

You may be asking yourself, “Why does this matter?” Well, the success and self-esteem of your student can be negatively impacted by being left-handed. Lance (2005) indicated that learning to read or other academic activities can be hindered by being left-handed. This is because right-handed students naturally tend to move from left to right when reading, which is how books are produced. A left-handed individual, however, naturally moves from right to left so learning to read takes a more intentional effort to move left to right. Furthermore, learning music and playing instruments, using hand tools (which can be VERY unsafe for a left-handed individual), or even computers and keyboarding can be hindered (Lance, 2005). This can be frustrating for the leftie because what comes naturally to right-handed students (since products are designed with the majority right-handed in mind) is basically backward for them (which can impact academic performance). These are things that we, as right-handed individuals, do not consider.

There are numerous theories regarding handedness, however we will not go into that. The important thing to understand is that we need to make sure our left-handed students have the materials necessary to make their work comfortable, productive and safe. There are websites where you can order left-hand oriented materials, such as spiral-bound notebooks, rulers and no smudge pens/pencils (although more expensive, but worth it!). I found some spiral-bound notebooks at our local K-Mart store which can be used either right-handed or left-handed. Some left-handed people compensate very well, however wouldn't it be better to provide our children with the tools to be successful? I was unable to find formal studies addressing this; however, left-handed students appear to perform better when provided with materials oriented toward their way of working. This simple change could be the difference between poor academic achievement and academic success for your left-handed student!

Why are some people left handed? 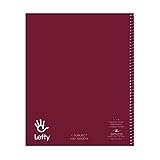