The Center was Poor but Spotlessly Clean

The thing I remember the most about the room was the floor. It was worn smooth with age but still showed signs of paint. However, the most vivid memory was how clean it was!

The room was full of people every day. Most of the people were children in diapers Yet the floor was spotless - no dust, no clutter. Just beds and children all around.

It was milk time when we arrived. All the children, except the sleeping babies, were given milk. Babies who were too young to sit up were given one of the scarce baby bottles. Everyone else was given a glass of milk. Food, especially milk, was apparently scarce because even the smallest clung to their glasses and quickly emptied them without spilling a drop.

While their faces smiled with delight at the daily treat you could tell that even the youngest knew that there was no more available to replace any that was spilled. It soon dawned on me that the spotless floor was as much the product of austerity as of good housekeeping.

It Was as if God Had Led Us to the Room

It was a simple, happy room basking in the glow of children's smiles.

But there was sadness too. One only had to look in the crib by the entrance. A beautiful baby girl slept soundly. Only she wasn't a baby - she was a two year old whose malnourished body had never received the nourishment needed to grow.

We were immediately the center of attention. Like our visit to Valle de Angles the day before, we were instantly surrounded by smiling children clinging to our legs.

The staff knew us without introduction. They were expecting us yet we had not been in contact with them in months and had not decided to fly to the other side of Honduras until the night before. The information we had received up to this point had been vague and somewhat contradictory.

If we had been successful in our visit to Valle de Angeles outside Tegucigalpa the day before we might never have come here. But we weren't successful and my time was limited. It was now Monday and I had to return to the United States and be back to work on Friday.

The previous Friday had been spent flying from Tucson, Arizona to Tegucigalpa, Honduras via Houston, Belize and San Salvador, The economic situation in Honduras, at that time the second poorest nation in the Western Hemisphere after Haiti, was such that they could not afford to install landing lights at the airport in Tegucigalpa, the nation's capital.

Saturday found us sitting in a hotel after missing our last plane connection on Friday. We had finally arrived in Tegucigalpa Saturday night. Our visit to Valle de Angles on Sunday was not successful. That had left two small leads plus the vague prospect of other places.

At the embassy picnic Sunday afternoon our suspicion, that one of our two leads was useless, was confirmed. 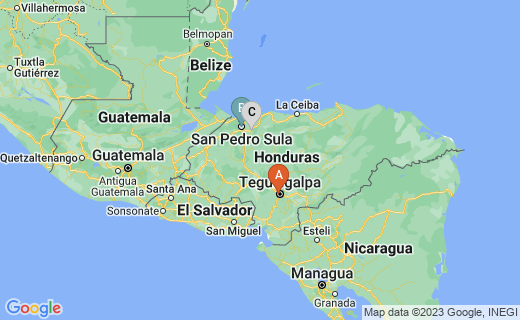 Tegucigalpa capital of Honduras and place where we stayed with friends while in Honduras.

San Pedro Sula a large city in Honduras and whose airport we flew to in order to get to El Progreso where we found our son.

Town of El Progreso where we found the son we adopted.

On Sunday evening we attempted to call the church sponsored child nutrition center where we were now standing. But the telephone lines were out.

On Monday, in desperation, we took the 8 a.m. plane to San Pedro Sula. I had twenty U.S. dollars and some spare Lempuras my friends had lent me. My wife, who is both a good negotiator and bi-lingual, negotiated the cab fare to ten dollars U.S.

In the room I was nervous not knowing what to expect. Attention was focused on my wife and I was trying to follow with my limited Spanish. Then they pulled a healthy little boy through the clutch of children, pointed him toward my wife, and said "Mama".

He went to her immediately. He was a happy, beautiful child, clad only in a maroon dish towel that served as a diaper.

Our quest was successful and David was now a part of our family. He had shared the simple faith of the nun who had been caring for him. She knew, and he believed, that we would be coming for him. Hence, there was no surprise when we arrived.

In the little town of Progresso, Honduras, where the telephones worked sometimes and the cab drivers thought it was too far from the airport to bother driving there, our family had come together.

Thanks to the nun's simple faith and love for her little charge, we had been guided, as if by the invisible hand of an angel, to our rendezvous in this little room. In the process we had successfully overcome missed flights, broken telephone connections, and less than eager cab drivers.

David and the nun both knew we were coming and, at that moment, when David rushed into my wife's outstretched arms, we realized where God's hidden hand had been leading us since our departure from Tucson three days and a thousand miles or so earlier.

NOTE: the above true story was originally written as an exercise in a writing workshop that I attended almost thirty years ago shorty after our return from Honduras with our, then new, nineteen month old son. 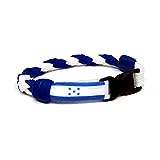 Links to Some of My Other Hubs