Just after Dad turned 59 he was diagnosed with a brain tumor. They sent him to San Francisco for surgery and treatment but basically, the doctors gave him 18 months to live. I don't know if it's worse to have it happen suddenly or to have it linger as this did. Mom called all of us and laid down a directive. "You will not come over here and cry," she said. "We need to be strong for Dad now and if you need to cry, do it at home." She was serious. We came nearly every day and visited. I told jokes and make Dad laugh, told him I loved him and went home and cried. My Mom is one of those bricks, you know, the kind who rarely shows emotion. Not that she didn't have emotion. She just didn't get overly excited or depressed about anything. She was with him always and when he couldn't get around much anymore she moved a hospital bed into the living room and there he was for us to visit still. On the last day, we all got the call that this was it. We came, sang songs, held hands and talked to Dad even though he wasn't really hearing us anymore. We assured him we would take care of Mom and it would all be okay. Sometime after midnight, he stopped breathing. And that is when my Mom let go. She threw herself on him and cried as I have never seen her cry before (and hope to never see again). Her mom, my grandmother, had to pull her off and help her get a grip.

The crackle of the wood on the open fire; the smell of cool, pine-scented air; the taste of sweet mountain water; and the sparkle of the stars so close you could touch them, are some of the joys my Dad instilled in us from an early age. Even on the way to the mountains, as soon as pine trees came into view, he would make us ope the car windows and breathe. "Breath, girls, breathe," he would say, as though we hadn’t been breathing for months. We lived in California’s big San Joaquin Valley but my Dad’s heart was in those Sierra Nevada Mountains. Not a summer passed without at least one trip out of the "flatlands" into the winding roads and logging trails until we found some secluded spot only God’s finger found before us. Many times we would pass slow moving cars my Dad would label as "flatlanders!" I tried to reason with him that we were technical "flatlanders" too. He only grinned and mumbled, "not if you’re heart’s in the hills."After three hours of dirt roads, we arrived at a place that suited him as secluded enough; we began to unload tent and lawn chairs and bedding. My Dad would take his usual supervisory posture lying between two chairs and drinking in the view, while the rest of us unloaded and put up the campsite. He just pointed to where we were to set up and we obeyed.

My sisters and I still remark about how the taste of any food was so much better up there as though all your senses were enhanced somehow. So after a meal of sandwiches, we would scatter for a hike while Dad napped and Mom set up her “kitchen” area. My dad was very careful to teach us all the necessary safety tips, marking your trail, moss on the north side of the trees, etc. Even with his training, we still managed to get lost now and then, and had to wait for Dad to find us like Daniel Boone. Once my sister and I got off the beaten trail to follow a doe into the woods. She gave us a merry chase, peeking from between the trees just long enough to draw us farther and farther away from our trail before disappearing completely. Lizards and other small critters made way as we intruded upon their domain. I thought I was very cleaver following the sun in order to backtrack to our trail when it struck me that the sun had moved. My sister was ready to sit down and cry but I still wanted to get back to our camp before Daniel Boone arrived. I thought if only I could get high enough maybe I could see the elusive trail. So I climbed a nearby hill and sure enough, found the trail we left two hours before, just beyond the next ridge. It took us three hours to get lost and find our way back and the dinner that night tasted especially good to two weary lost hikers. We arrived at camp just in time to see Dad preparing to search for us. He was almost as glad to see us arrive as we were to make it back to camp without help. 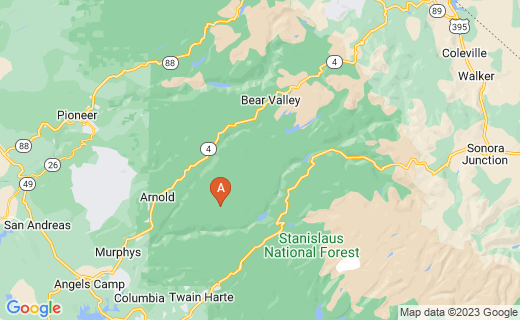 Mom cooked fried chicken over the open fire and baked potatoes wrapped in aluminum foil among the coals. She even made biscuits in a little cast iron Dutch oven. The smoke from the pinewood campfire swirled up in long plumes between the trees and nothing smells as good as pine smoke in the mountains. The sunset was a thrill and the night sky bejeweled with more stars than I knew existed, mixed with sparks from the fire. We would listen to campfire stories told by Dad and make up a few of our own. Before we were ready it was time to go to sleep. Snug in our sleeping bags in the tent, we could still hear the voices of Mom and Dad echoing in that strange way that everything does in the mountains. What pleasant dreams I had there. I didn’t even mind the rocks and twigs under my sleeping bag, digging me in the ribs all night.

Photo credit: Snapshot of my sister and brother eating around the campfire, taken with my little Brownie camera.

“A father carries pictures where his money used to be.”

In the Deer's Backyard

In the clear crisp morning, I woke to the smell of coffee and campfire smoke, as Mom was whipping up pancakes and bacon for breakfast. We kids examined the tracks of several deer, which came through our camp in the night. We were thrilled to think that woodland creatures had scrutinized us in our sleep. Dad told us that we were in their backyard and they had every right to look us over. Even the songs of the birds seemed to sound better and last longer as if the air could carry the tune longer without the clutter of car horns and traffic noises. It was in those mountains that I first discovered my love for drawing; my love of beauty and trying to re-create it. I would take my tablet and colored pencils with me to sketch whatever I could find. I thought of myself as a pioneer naturalist like John Muir or John James Audubon, drawing wildflowers and plants, birds and trees, trying to discover later what they were called. I still have drawings from long ago along with aged pressed specimens. In the early summer, there were still snow flowers here and there under the fir trees. I never picked those. Those were too beautiful and fragile looking. Later in the summer, there were lots of roadside lupines and monkey flowers. Along the icy streams were lots of little Shooting stars or Dog’s tooth.

“It doesn’t matter who my father was. It matters who I remember he was.”

Contents of My Nature Journal

What does it take to leave a legacy?

Altogether too soon, it was time to leave the mountains and head for the valley again. We packed up everything including our trash and even brushed the ground where we had been to camouflage the signs of our trespass on the resident’s backyard. Dad made sure the campfire was drowned and buried so there would be no forest fire because of us. He always said that we should leave it as we found it so when we came back, the mountains would look as untouched as the first time we came, a home for the wild things. When my Dad was ill and new his time was short, he and Mom discussed funeral arrangements and where he would be buried. He decided he didn’t want the expense of some stone in a cemetery no one would visit after Mom and we, his children were gone. He decided he wanted to be up to the mountains that he loved so much. So he was cremated. He passed in December of 1992 and we had to wait till the following July to pack in on horseback to a spot he loved to go to because it was so secluded. We all went, including Mom on horseback, two hours over rough rocky paths. It is kind of funny to think of him up there in the mountains that he loved so much, with the coffee mug next to him, under a pine tree overseeing the wild things. In the research of my ancestry, I discovered the Scotts were from the Highlands of Scotland and a long forgotten branch of the family lived on Scott Mountain in West Virginia. Maybe that's why Dad loved the mountains so much. Who knows.

“One father is more than a hundred schoolmasters.”

My Mom is a Brick

At Dad's funeral, I thought Mom was going to climb into the coffin with him. He was her love, her life. He was only 60. It has been 20 years now and Mom is still with us. I was afraid she would waste away without him but she has found a way to carry on, although I'm sure it hasn't been easy. She has often talks about him and how he would have loved to see this or that, the grandkids, the great-grandkids, etc. She spends a lot of time with her widowed sister and their widowed aunts. They play cards together, go for walks together, and go to quilting classes together. I'm so proud of my Mom for her strength and her devotion. She has shown me what real marriage is supposed to be like.