The Real Reason Why Your Child May Hate Physical Ed. Class….

It’s been reported quite frequently the children of today are less active then previous generations. Some of the blame has been placed on technology. (ie computers, iPads, cell phones, texting, tweeting, video games, MySpace, FaceBook, or simply watching TV) Without a doubt all of these activities have led children towards having a more sedentary life than previous generations. This is especially true during the summer vacation period.

During my childhood parents would have to hunt to find their kids after the streetlights came on. Kids would start the day by knocking on each other’s door begging parents to let their friends come out to play. We’d ride our bikes across town, race each other while rolling old tires, have water pistol fights, climb trees, play touch football in the streets, play basketball on the school playground, play hide and seek, “tag or it”. cash in bottles to buy candy and snacks, shoot marbles, spike each other’s spinning tops, make each other laugh by telling “your momma jokes” or insulting one another in a funny way.

It seemed like we never ran out of things to do even when none of us had any real money.

I suppose those days are gone and never to return again. Besides the various technology gadgets that exist today we also appear to have more incidences of adults looking to hurt children. Many parents today are afraid to let their children out of sight several hours. A lot of kids today have never walked more than a couple of blocks to school.

A Change In The Game

Even back in those days it wasn’t uncommon for kids to want to avoid P.E. class.

It’s not as though they suddenly disliked playing games or even participating in exercises such as doing jumping jacks or climbing the rope. What changed?

The first change begins with being called by their last name instead of their first name. Some coaches strive to be intimidating and often times bark instructions in a tone your child may not be accustom to. It's not uncommon for some of them to pick on a kid or two in each class. This may lead to the kids in the class also picking on the same kid as well.

A lot of kids don’t care for being nude around each other, taking group showers, or as was done in many midwestern high schools during the 50s, 60s, and 70s when boys were forced to swim nude. This was done supposedly to avoid filling up the pool traps with thread or materials from swim trunks. However girls wore bathing suits on their swim days. Hmmmmm. At any rate a child has spent his/her first several years of life in the bathroom alone.

A child goes from using the bathroom and taking showers in private to being thrown into a wide open locker room multi-shower head room with no privacy stalls.

He/she may develop their first case of body image issues as they compare themselves to others. Another issue at least in many boys’ locker rooms is kids engaging in horseplay.

One kid walks by and another winds a towel up and pops his ass. Everyone laughs.

Some kids get a kick out of removing towels while others are showering.

There are kids with strong personalities and others who are pure bullies.

Nothing can make a child feel worse than facing his or her tormentor in the nude.

Some guys piss while taking showers as if they were standing in front of a urinal.

Eventually your child may get used to being nude in public showers and locker rooms.

However there are some kids that never get comfortable with the idea of public nudity.

A few kids have been known to try and get dressed without taking a shower while others come up with an excuse to skip P.E. altogether.

The younger a child is exposed to the public shower environment the easier it is for him or her to adapt. They are too young to have body image issues.

Last but not least you may want to have a discussion to prepare your child.

If he/she has any sports heroes you might let them know their hero takes showers with his teammates as well. However the most effective method is likely to come from a conversation you have where you let them know you went through the same thing.

Make sure you let them know they can come to you with any problems they may have.

Did you hate taking group showers with other kids after gym class? 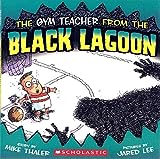 The Gym Teacher from the Black Lagoon
Buy Now