Let me be mad, then, by all means! mad with the madness of Absinthe, the wildest, most luxurious madness in the world! Vive la folie! Vive l’amour! Vive l’animalisme! Vive le Diable!” ~Marie Corelli,

Wormwood: A Drama of Paris

Many people have heard about the incredible and at times terrifying effects of the "Green Fairy," more commonly known as Absinthe. Yet now that the infamous beverage is legal and available inside of the US for the first time in over a century, there is much that we can still learn about the history and effects of one of history's most notorious libations.

Absinthe first came onto the scene in the late eighteenth century France. The creator, Dr. Pierre Ordinaire, first came up with the idea as a medical remedy for several ailments by combining wormwood, a known hallucinogen, with herbs and spices, and distilling them all within an alcoholic base. Due to some of the euphoric and disorienting effects of the drink, it was commonly believed that this 'medicine' truly did work.

A Very Different Sort of Beverage

Absinthe is very unlike many forms of alcohol commonly available on the market today. Firstly, it has a much higher percentage of alcohol than many other spirits - different varieties can range anywhere between 50% - 90% alcohol. This is much higher than your average gin, whisky or vodka, which commonly clock in at about 40% alcohol.

Additionally, if you are able to sample true absinthe with wormwood (which is only available in certain parts of Europe), be sure to beware the Green Fairy. The potent chemical Thujone can cause hallucinations and, even in the very mildest cases, extremely distorted perceptions of reality. Do not take this lightly!

Absinthe In History and Popular Culture

As a medicine, absinthe was commonly used to treat a variety of ailments, such as epilepsy, kidney stones, headaches, and worms. However, after a few years on the market, another Frenchman, Major Henri Daniel Dubied, decided to serve the concoction as a leisure drink. During France's Belle Epoque, artists, authors, politicians, and all manner of aristocracy began to adopt the drink as their beverage of choice.

Perhaps the most familiar face associate with absinthe would be that of the famous painter Vincent Van Gogh There is much speculation from art historians who believe that much of Van Gogh's unique perception of lighting and space may have come from the way he viewed the world while consuming absinthe. Arguably, it seems that the hallucinogenic properties of absinthe may have helped to create some of the most beautiful and original artwork in modern history!

Countless other artists and authors have attributed the effects of absinthe as a sort of fuel for their creativity. Degas, Picasso, Braque, Hemingway, Baudelaire, and Oscar Wilde have all been associated with consuming the drink during some of their most creative periods. In fact, many of the patrons who frequented Parisian hot-spots during this period, and particularly patrons of the majestic Moulin Rouge, were often greeted with several varieties of absinthe to suit their creative pallets.

Absinthe's Effects on the Brain

Researchers from Northwestern University Medical School,Berkeley, and University of California studied the effects of wormwood on the human brain. Through their research, these scientists determined that the wormwood and many of the other ingredients in absinthe may actually generate “CNS cholinergic receptor binding activity.” In layman's terns, some of the effects of absinthe may actually improve some of the cognitive functions of the brain!

Perhaps many artists and creative minds at this time were aware of these benefits, and were able to give the world some of the most beautiful art and literature of the time simply because of the infamous beverage.

Why Its Now Legal In The US and UK

Traditional absinthe was particularly potent because of a chemical called Thujone, which is the main chemical in wormwood which induces hallucinations. In recent years, chemists and specialists within the liquor industry have found ways to filter out this chemical from the original recipe while still keeping much of the original coloring and flavor. This allows the drinker to experience absinthe in all it's green glory without the concern of hallucinating little green fairies or other fantastic creatures which are not actually there.

Absinthe is available in the US in most common liquor stores. Most are reported to have a strong dark licorice taste, due to the use of anise commonly added to the concoction. Do try this out for yourself, and give your feedback about your personal experience with "The Green Fairy," in the US, UK or abroad.

Are you interested in trying the green fairy for yourself! 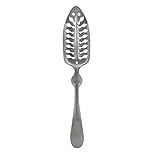 The Way to Drink Absinthe

The most important fact of absinthe is that it generally should NOT be consumed strait-up, primarily due to it's high alcohol content, and strong flavor. It is meant to be enjoyed after some preparation.

There are many ways to consume absinthe, as in the modern era, in does come in some different forms. However, there is one classical way, presumed to be the original method, of preparing absinthe:

How to serve and drink absinthe the proper way