The Best BPA Free Containers For Storage Or Kids Lunches

BPA or bisphenol A is now widely recognized as a chemical to which we should either limit exposure or avoid. The USA National Toxicology Program has concluded that at the current level of exposure there is some concern for the effects of BPA on foetuses, babies and children. The particular areas of concern are on the brain, behavior and prostate gland. In 2003 – 2004 a research project found traces of BPA in 93% of urine samples from people aged six or over.

Partly, it is the sheer quantity of BPA in the environment that leads to the high risk of contamination. It is present in many polycarbonate plastics and epoxy resins. Some places you could be exposed to BPA are: food cans, water pipes, some dental sealants, food storage containers or water bottles. In several countries its use in babies’ bottles is now banned.

BPA is known to be a hormone disrupter. Hormone disrupters either mimic or block our natural hormones, and can cause hormonal imbalances in the body. The hormone that BPA has an impact on is estrogen, and some people are concerned that it could be implicated in breast cancer. The main reason BPA has been banned from babies’ bottles is because it leaches from plastics when they are heated. While there is still more research needed to ascertain its effects, it is wise to limit exposure, especially for our children.

An Alternative to Plastic

A very good alternative container to plastic is stainless steel. It is possible to buy containers that are entirely stainless steel, but more often you will find them with a BPA free plastic lid. Two companies that make them with children’s lunchboxes in mind are Kids’ Konserve and LunchBots. Both have a wide range of containers to choose from, and LunchBots even have an insulated container that will keep food warm (or cold) for up to 5 hours. Because of the way the lid of this container is designed, no plastic comes into contact with the hot food.

BPA-free Containers are available on Amazon 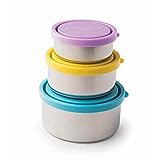 U Konserve - Nesting Trio, Perfect for Lunches or Picnics, Reduce Waste, Dishwasher Safe (Round, Sky)
These have BPA free plastic lids and come in sets of 3, with 2 choices of color.
Buy Now

The containers we use are the Nesting Trio with Leak-Proof Lids by Kids Konserve, made of stainless steel. I found it hard to believe the lids really would be leak-proof, so I filled one with water, put the lid on top, turned it upside-down and left it for an hour. Not a drop of water had spilled out. When I turned it the right way up and took off the lid a little water did splash out. But as you are not likely to use them to store water, I think we can say that for most foods they will be fully leak-proof. Certainly they are suitable for dips such as hummus.

We use the smaller two containers for our children’s lunchboxes, and the larger one for storing food. Most lunch-times at school my daughters, aged 12 and 14, have a bread roll filled with nut butter or cheese, and that fits perfectly into the middle container. In the smallest container they have chopped up vegetables or cherry tomatoes. It can hold 6 cherry tomatoes, or a chopped carrot or pepper – enough for a portion of vegetables. You can see the filled containers in the photograph at the top, or in the photo below. Although the container looks very small, it is possible to fit an entire romano pepper inside.

This entire Romano pepper fits into the smallest container

Quality of the Lids

Reading reviews on Amazon, I noticed that one or people say that lids have cracked. This surprised me because the quality of the lid is one of the reasons I like these containers so much. We have been using various brands of stainless steel containers with plastic lids for several years, and the Kids Konserve lids are far better than any others I have used. Ours are a year old now and as good as new. I guess with any product line there will be a few that are faulty, and Kids Konserve do offer a full money back guarantee if you are dissatisfied in any way with their products.

The photos below show the difference between the lid on a container by a different manufacturer and a Kids Conserve one. The other lid has buckled which makes it impossible to stay on its container, and it has also cracked. The Kids Konserve lid is flat and intact after being used for school lunches for one year.

How to wash the containers.

It's possible that some of the people who complained of cracked lids have washed their containers differently to how we do. I often put the containers in the dishwasher, but always wash the lids by hand.

The lid on the left is by another manufacturer, the one on the right is Kids Konserve

My rating for Kids Konserve

The National Institute of Environmental Health Sciences: Bisphenol A (BPA)

Government of Canada: Bisphenol A