Mayor Michael Colemen rid Columbus, Ohio of dozens of its abandoned buildings, had them torn down, and partnered with community based organizations and private business in order to build state of the art apartment buildings and multi-use complexes to replace them - nw dining places are always opening up in Columbus..

Old houses were not the Mayor's only targets. The Columbus City Center Mall at 160 South High Street fell into disuse, so Coleman had it torn down and the land converted to a green space with an entertainment stage and a carousel, as well as concession areas. Every August or September, the Columbus Food Truck Fest is held there, but the trucks gather regularly throughout the year, especially at lunch time and on many Friday and Saturday evenings.

At any of these less formal gatherings, you can visit dozens of the 100+ food trucks in town and sample World and American Regional Cuisines. Dedicated taco trucks are a different story - there are dozens of them on our streets as well. 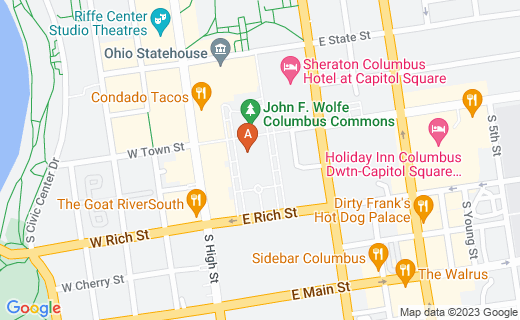 Of the numerous mobile dining opportunities offered by the city, five food trucks hit the news more often than all the rest - so far. Many of the others are becoming just as popular as word spreads of their American, ethnic, and gourmet cuisines.

The fact that Cable TV cooking challenge show incorporate a food truck category has helped spur traffic to our local trucks and persuaded additional individuals to open food trucks. any of these new owners receive help from business incubators like the Food Fort, discussed below.

Challa - Member of the Food Fort and fairly new, this outfit serves exquisite Jewish Deli meals. Follow them on Twitter at @challahatyagrls Often found in the Short North area during Gallery Hop on Saturday nights and for lunch at The Ohio State University Medical Complex at 9th through 11th Avenues. Challa also participates in th Whitehall Food and Fun Festival at the inner suburb on Columbus's East Side.

Los Guachos - Rated as serving the 3rd Best Taco In the USA by Serious Eats Magazine in conjunction with Rachel Ray. The taco is chile-marinated bacon type pork, layered on a spit to roast with fresh pineapple whose juice carmelizes. The meat is slicd to order into a corn tortilla with diced onion and cilantro. Other menu items are just as good. If you are on the NW side of town, visit this truck as Los Guachos nightclub, 5221 Godown Road, Columbus OH 43235.

Mikey's Late Night Slice - Pizza at night. Named the Best Food Truck 2013 (and 2010) by Columbus Underground . Successful for years, Mikey's now has two trucks that serve the Short North near Downtown Columbus and Clintonville. They recommend their Bada Bing pizza that tastes like lasagna and their Mao and Cheezus pizza - plain or spicey.

The Coop - Eggs and poultry for breakfast and other occasions. Also in Clintonville. the truck operates at 2701 Indianola Avenue, Columbus, OH 43202. See the section below on this successful food truck.

This facility houses slots for many active food trucks, food carts, and caterers and facilitates creation of new jobs in Columbus, Ohio since 2011. The Food Fort is a proponent of sustainabililty and maintains use of local foods and products as well.

In 2012, the owners added a commercial kitchen and a bakery. Combined with food carts for rent, new chefs can try out their cuisines on the hungry Columbus lunch crowds in this business incubator model.

This is one reason that the Downtown Food Truck Fest at Columbus Commons offers larger number of food trucks every year. A Westerville festival to the Northeast of the city is also an annual success.

The Food Fort participates particularly in the Westerville festival every year, donating a part of proceeds to charity.

Members of the Food For hub of mobile food vendors enjoy many perks. One is that they have access 24/7/365 to the commercial kitchen and bakery, as well as the parking slots.

This system maintains safety with a brand new security system with high-tech cameras monitoring what is occurring inside and outside of the commissary at all times. 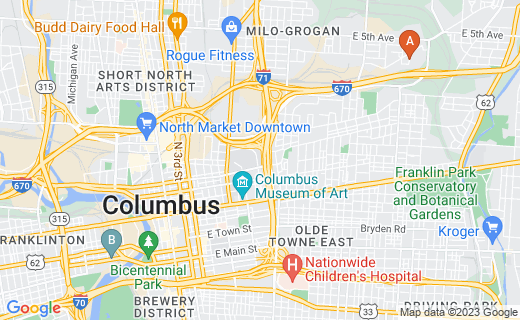 The Dinin' Hall at 400 West Rich Street near the Center of Science and Industry on the Scioto Mile was formerly the men's homeless shelter and when the shelter leaders decided not to accept an offer form the city for land and buildings in the north of the city, the shelter closed for business and sat empty.

A few years ago, the local grassroots movement toward locally grown crops and locally made products caught fire and vendors took over the former shelter site to make a farmer's market that is open every Saturday wit live entertainment. Just to the east is the Mound Street Community Gardens, on land donated by the c0ounty court system and the resulting crops can be brought the short distance to The Dinin' Hall and Farmers' Market.

Spotlight On Eggs and Poultry Specialists: The Coop in Columbus

The Coop - Eggs and Turducken Tacos

The Coop is a mobile food service trailer that operates from a converted circus trailer. Founded in August 2011, The Coop specializes in egg and poultry dishes.

Some of the unique dishes you can order at The Coop include plaintain curry, egg sandwiches, turduckem tacos, duck confit, huge bison sloppy joes, yak sausage burger, duck and kimchi stew, and many more. Thanksgiving brings out specials of the seaon that you would normally find in a gourmt restaurant.

The Coop raises it own chickens at Li'l Rhett Rooster Farms.

The Coop: Eggs and Poultry 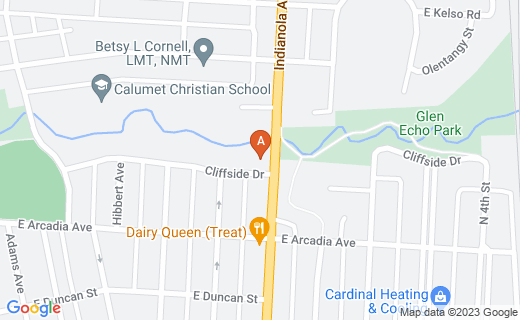 Building a Food Truck From a FedEx Truck