Bomba rice is a type of short grain Valencian rice that is great for using when preparing paellas and other rice dishes.

There are more than 2,000 rice varieties worldwide, and each has different properties making it special for just one or two dishes. The type of rice used to make a paella is not the same as one used to make risotto.

Bomba rice is more expensive than many other types of rice, but it is well worth paying that little bit more because of its wonderful abilities to absorb liquids without becoming overcooked.

Bomba rice is a japonica rice type, characterised by being short-grain (5.2mm) and rounded, and which tends to lengthen during cooking.

In Spain, it is grown around the Mediterranean basin although there are plantations in Seville, Badajoz, Murcia and Albacete, among other areas.

Bomba rice is a grain that absorbs a liquid to the point of doubling its volume. As such it easily retains the flavor of the stock and is very similar to other Valencian rice such as Bahía or Senia, with the advantage that if it is overcooked it does not break up like the others can, instead it retains its shape and texture. This property also makes Bomba rice great for storage as it does not cake like other rices can do.

In spite of all those wonderful properties, the production of Bomba rice almost stopped in Spain due to its slow productivity (4 tons per hectare) and the intensive care needed.

Demand has led to its re-introduction but it costs almost three times as much in the shops as other rice types.

Some people may even consider Bomba rice to be a gourmet product, but there is no other rice that can make a paella with the perfection of Bomba rice. 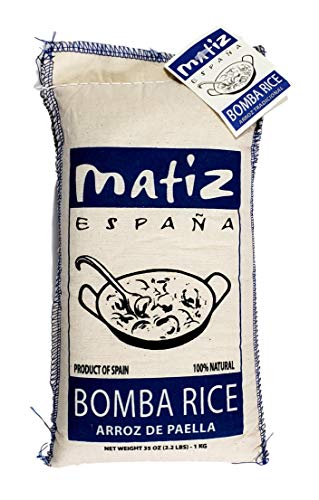 This is a traditional Valencian dish where leftovers from the previous days meal would be used. In the absence of leftovers, you can use this recipe.

Heat up stock. Meanwhile brown the meat all over in a large frying pan with olive oil. Set to one side. Fry the tomatoes with the chickpeas and rice and fry for a few minutes more.

Put everything into a casserole dish, add salt to taste and coloring or saffron, with the halved tomato and whole garlic head on the top. Place in a preheated moderate oven and cook for 20 minutes.

This is supposed to be a completely dry dish, so if there is any liquid left at the end of cooking time, cover the casserole with a lid or a newspaper and leave for a further 5 minutes to allow the stock to absorb. 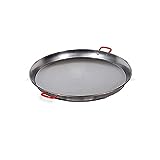 Commonly known as Alicante Paella, there is no seafood in rabbit paella, and chicken is frequently added (and snails, but we won't go there!)

Chop the rabbit up into bite size pieces, salt all over, and fry in olive oil on a large frying pan until it is browned all over.

While it is frying, prepare and chop your vegetables. Add the peppers first, then the beans or peas, then the tomatoes, though it doesn't matter if you just put them all in at once. Add paprika, chilli pepper and oregano.

Then put the lot into a big pot along with the heated stock and simmer for 15 minutes.

In a wide paella pan, add the rice and fry gently in some olive oil. Check if your stock with the meat and vegetables has enough salt, then add the lot to the rice.

Boil gently for 17 minutes. Add extra water from thekettleif it dries out too much before the end of cooking time. If at the end of 17 minutes there is still liquid there, remove from heat and cover with a newspaper. After 5 minutes or so, the rice should absorb all the liquid.

Decorate with sprigs of rosemary.