My eye was caught by a catchy little article in the paper the other morning. At the time I was drinking my Starbucks Coffee and eating a Skinny Blueberry Muffin. This was my breakfast.

The article was titled "Skip Breakfast, Lose Virginity". No worries, I lost my virginity a long time ago and it was a long way after breakfast. I had to think though. Had I missed breakfast that day? I think it unlikely because I was at boarding school when it happened and never got enough to eat. Missing any meal was a traumatic event.

Come to think of it I would definitely have skipped breakfast at twelve years of age if I thought I had half a chance.

You can make statistics do anything

Unusually I loved statistics at college. I liked the way results could be quickly changed using mean, median and mode and really appreciated the statement attributed to Benjamin Disraeli which said "There are Lies, Damned Lies and Statistics." Surely Sex and Virginity lay somewhere between the three.

Only 3000 people were surveyed

Only 3000 people were surveyed in concerns over the dropping Birth Rate in Japan. It also found that 40% of married couples had not had sex in a month because they were too tired when they got home from work.

On the virginity side it discovered that out of these 3000 that if you have a poor homelife i.e. 'Your Parents Don't Make You Breakfast' then you are more likely not to eat and so you will probably lose your virginity at 17.5 years rather than at 19.4.

I suppose statistically speaking then that my home life must have been pretty terrible because I was way under 17.5. But it wasn't. My homelife was good....only I wasn't at home.

Using the same survey results...poor homelife...I would be prepared to guess that in the same group of people there were also those who drank alcohol earlier, smoked, took drugs, stayed out all night and and and I could go on. Surely the alcohol would be a more likely reason...inhibitions masked and sensibility dulled....but then there is always that alcohol on an empty stomach hits harder. So perhaps it was the missing breakfast after all. 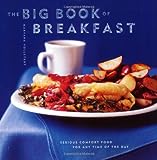 The Big Book of Breakfast: Serious Comfort Food for Any Time of the Day
Buy Now