According to their website, Via Mare has been steadily growing, increasing, and continuing to be a frontrunner in the restaurant and catering industry for over 30 solid years since it opened its very first Via Mare Seafood Specialty Restaurant on September 5, 1975.

We currently operate the Cafe Via Mare, a dining concept that has been hailed as a pioneer at creating a truly Filipino café. This brand copped a niche in the hearts of diners with such heartwarming fares as bibingka, puto bumbong, pancit luglog and dinuguan.Also along with it is The Via Mare Oyster Bar, an upscale seafood dining restaurant well-known for its oyster menus, and lastly the much-awared Via Mare Catering, a mobile catering services provider for the business, government and social sectors of Manila as well as other major cities of the country. Through the years its restaurant outlets and catering division brought pride to the Philippines through its tireless pursuit of elevating Filipino cooking to a global status at par with the world's best.

Since the opening of its branch inside the university, and I guess even before that, Cafe Via Mare has been a favorite among the professors at the university which I work for. I guess this can be attributed to the fact that the restaurant offers a wide range of food selections that can surely satisfy anyone's unique palate with its sumptuous offerings.

Some of the food offerings include various rice cakes such as the cheese bibingka (a typical Christmas rice cake) which I personally love. It's embarrassing to admit that although I am a Filipino, it was only when I was in high school that I got to try the famous bibingka, and it was Via Mare's bibingka! No wonder every other bibingka I ever got to try seemed inadequate and lacking! My first taste was of the best! How could i even find a substitute?

It's quite a bother though because every time I get a craving for it, I would not even bother trying others any longer because I'd only end up disappointed. Via Mare's bibingka retails at around 115-140 php depending on which kind you'd order for. They also have bibingka cassava, puto maya, and puto bumbong among others.

Anyway, cheese bibingka is my absolute fave. It is made using the traditional keso de bola. I definitely love how the cheese is perfect for this bibingka because on normal days, I wouldn't even take a bite of keso de bola. I think it's too salty when you take it by itself. But with Cafe Via Mare's bibingka, the saltiness isn't overpowering. It gives just the right amount of flavor. :)

Altanghap is a portmanteau word formed from the words Almusal, Tanghalian, and Hapunan. Thus, Altanghap are set meals (rice with choice viand) that are good to eat any time of the day. These include the following:

Masaganang tanghalian, or hearty lunch, are viands that are big enough for sharing. Some of these delicious dishes include:

What would you order at Cafe Via Mare?

The folks at my department really love Via Mare that during one conference we organized, my boss decided to treat everyone out to a lunch at Via Mare. There were about 30-35 pax and we pre-ordered the food. It totaled to about Php 15,000.00. It was quite a party.

Prices are a bit steep, seeing that these are your usual Filipino food, but the great taste of the food and the coziness of the place more than make up for it. I would definitely visit this place again, especially when I crave Filipino food but would like to escape the mundane stuff i eat everyday. Also, I'd surely drop by for that awesome bibingka that I can't seem to get enough of. <3 Try it if ever you're in the area. It's worth your money. 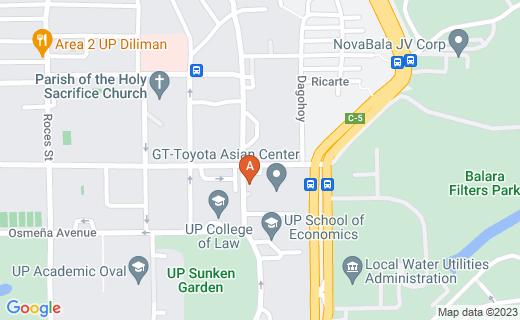 Cafe Via Mare is located at the GT-Toyota Asian Center at the University of the Philippines, Diliman, Quezon City. The building is beside Romulo Hall,

Ever tried Cafe Via Mare? Share your experience with us! We've love to hear from you.