Cheese is Golden in California

Going back several years now, Wisconsin has always been considered the cheese state.  The Green Bay Packers fans wear huge wedges of cheese on their heads at football games.  When you think US cheese, you think Wisconsin.  In fact, if you ask Google which state is the top producer of cheese, you get a huge number of results in which the answer is invariably, “Wisconsin.”  That’s just the way it is, right?  Well, no.

According to a 2008 report from the USDA, California tops Wisconsin in milk and cheese production for the United States.  Though this may not come as a surprise to Californians, it came as a surprise to me.  When did California start producing cheese instead of oranges, wine and actors?  Apparently, a long time ago.

In 1769 Father Junipero Serra, a Spanish missionary, began the establishment of what would eventually be 21 missions throughout California.  One of the goals of the missions was to be self-sufficient, and to achieve this end, the missionaries brought an abundance of plants and animals with them, including dairy cows.  These missions would pave the way for California’s agriculture industry.  Ivan Kuskov, a commander of a Russian trading post at Fort Ross, California was the first person to export California cheese.  In 1800 he sent his Sonoma-made cheese to Russian villages in Alaska.

With the Gold Rush, California’s population swelled as tales of the gold rush drew new settlers from across the nation. Many who ventured to California to find their fortunes brought dairy cows tied to the backs of their wagons to provide milk for babies and children.  The Steele family started the country’s first commercial cheese production facility in 1857.  By 1860 California boasted 100,000 head of dairy cattle which fueled an increase in cheese production.  That same year California produced 1.3 million pounds of cheese.

Monterey Jack is one of the most popular cheeses on the market and is native to California. “Monterey” comes from the town of Monterey on California’s central coast near Pebble Beach.  “Jack” comes from David Jacks, the pioneer of Monterey Jack cheese in the early 1900s.  David Jacks’ recipe came from his Swiss and Portuguese employees, who took the recipes from those of the Old Spanish missions. Today, California still produces more Monterey Jack than any other state.

Cheese production finds another variation in the kind of milk used in the cheese.  Cows, goats and sheep all thrive in California’s mild climate, allowing California cheese makers the ability to produce cheese from different sources and of different styles. California makes nearly a quarter of all the cheese in the US.  California also produces many award winning cheeses, such as winners at the 2009 World Cheese Competition – Joseph Gallo Farms’ Provolone Cheese winner and Marin French Cheese Company’s Le Petit Dejeuner winner.

Cheese is obviously a big business in California.  A quick search of California cheese on the internet yields scrumptious-looking cheeses at online catalogs like igourmet.com.  If we are to believe everything we see on TV, we will believe that “cheese comes from happy cows.  And happy cows come from California.”  Apparently we can believe at least some things we see on TV. 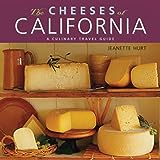 The Cheeses of California: A Culinary Travel Guide
Buy Now