How Many Apple Varieties Are There?

When I was a small child, we had only three varieties of apples at our two local grocery store chains: red delicious, golden delicious, and the “new” Washington State apples – “With the bumps on the bottom,” as Flippo the King of the Clowns told us every afternoon on TV. Washington State apples and their distributors were sponsors of his cartoon and old-movie show and became very popular through this advertising campaign. This opened the apple market of Ohio to accept even more out-of-state varieties, even though the state grew many more of its own.

A few years later, the two The grocery chains added Granny Smiths and Asian Apple-Pears next for their apple rosters and we had 5 varies. As additional grocery chains came to town and Ohio famers delivered more produce to all of these chains, the apply population expanded to include about a dozen varieties. In the 21st Century, there is a growing trend to buy local and we’re finding several Ohio grown varieties in the stores today. In fact, I have not seen a Washington apple recently – and Flippo’s TV stage, costumes and other memorabilia are all in the museum now.

You’d think we’d have had more varieties of apples in Ohio, since Johnny Appleseed had come though the state from the east, crossed Ohio, and ventured on to Indiana and Michigan, crisscrossing back and forth for 40 years, planting several varieties apple trees. Actually, Ohio was home to multiple dozens of apple varieties at one point and orchard growers began to specialize in the most popular varieties.

Some excellent recipes and some more apple history follow. 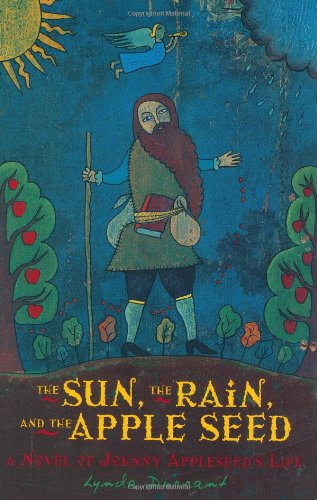 The Sun, the Rain, and the Apple Seed: A Novel of Johnny Appleseed's Life (Aesop Accolades (Awards))
Buy Now

Try to give a rating for this recipe

5 stars from 1 rating of Crab-Apple Slaw

John Chapman (Johnny Appleseed [1774 – 1845]) was born in Massachusetts. As a youth, he became an orchard apprentice and at age 18, he took a younger brother and sister with him to Pennsylvania and continued to learn about raising orchards and performing nursery farming. His father was the head of the group of carpenters that had worked for General George Washington, so this was all very early in the history of the New Nation, USA.

Chapman lived in Ohio in 1800 -1801 in Licking County, having come through Guernsey County where my great-great grandfather (who may have met Chapman) and great grandfather owned two houses situated together on active farmland. My great grandfather and his descendants enjoyed the apples from the trees that Chapman planted from seeds in Eastern Ohio for a long while.

John Chapman continued to spread apple seeds in Southern Ohio, Kentucky, and back up to Northern Ohio and then over to Indiana, where he died. He planted scattered nurseries and gave authority over them to local residents to sell the trees and provide him with some income or bartered goods when he came back by every year or so to check on progress. As a member of the Swedenborgian Church, he believed that helping others by planting these apple nurseries as a source of food was a calling and that such good acts were required so that God could do them through people.

When he died, Johnny Appleseed left an estate of so many nurseries that they were worth millions of dollars in 1845 currency.