There are lots of great recipes online that may call for ingredients you don't have on hand. Here, I create a veggie wrap variation.

Use What You Have On Hand

Recently, I saw this video on YouTube which shows how to make several quick and easy vegan snacks. I'm not a vegan, but I do eat quite a few meatless dishes. The Crispy Veggie Wraps looked really good, but I didn't have all of the necessary ingredients on hand. I decided to try with what I had, and here's how it turned out!

Here’s How It’s Supposed To Be

a handful of spinach

a small handful of chickpeas

Here's How I Did It

Frozen Ingredients Had to be Cooked

The original recipe calls for all raw or cool ingredients. Since the spinach, onion and bell peppers I used were frozen, I sauteed them for about 5 minutes and then added the tomatoes, chickpeas and spices and heated through.

The Cheese can be Difficult to Spread

I filled with the tortillas with the filling and folded them up, added a little coconut oil to the pan, increased the heat just a bit and browned them for three minutes on each side.

Make Adjustments to Suit Your Tastes

This first run turned out pretty well. The second time I made these, I browned them for three-and-a-half minutes on each side, and the results were better. I also increased the amount of spices I used and added fresh, sliced mushrooms just because I had them on hand.

Don't be afraid to make adjustments to recipes to suit your own tastes and your own cupboard. That's how secret recipes are born!

I happened to have homemade yogurt on hand and a bottle of Sriracha Salsa. That turned out to be just the right combination for me, but you will surely have your own favorites in your cupboard or refrigerator. 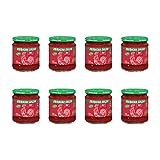