Limousin is famous for apples and pears and this traditional Limousin flognard recipe is easy and delicious!

Flognard, like the better known clafoutis, is fruit baked in a sweet batter but while clafoutis is made with apples or pears, clafoutis is typically made with cherries. In Limousin you'll be offered Flognarde, a speciality of the Limousin and Auvergne region, in restaurants and the homes of your hosts alike - they do love their apple, pear and cherry puds in this part of France.

The orchards of Limousin are a wonderful sight and many sell apples and pears direct to the public. Here you can often pick your own, choose form perhaps 8 - 15 varieties, try juice made from freshly crushed fruit, or sample many of the other local delicacies; honey, walnuts, chestnuts, chestnut liqueur and foie gras. Needless to say, there are many fabulous local recipes for cooking the fruit.

At Les Trois Chenes Chambres d'hotes, we try to serve local French food, and, if possible, buy from local producers the things we don't produce or grow ourselves.

Apples paly a large part in the autumn festivities at the little town of Chabanais, about fifteen minutes from Les Trois Chenes and just over the border into the Charente area. Called 'Les Journees de la Quintinie', the Chabanais fall festival takes it name from Jean-Baptiste de La Quintinie, the 'Potager du roi' under King Louis XIV.

The pictures to the right and below show the variety of apples and pears on display, and the commune crushing apples for fresh apple juice or cider. We bought two litres of the most fabulous, freshly crushed, absolutely pure apple juice.

For more on food and wine

To make the Flognarde you will need

Peel, core and slice the apples

Slice the apples into fairly thin wedges as shown in the picture to the right. (Mine are a bit rustic and on the thick side.)

I did this by sieving the flour, baking powder and salt together into the bowl. Adding the butter, microwaving it until just on the point of melting and mixing this into a roux, (which just means flour and fat mixed together to form a paste!) Then I added the eggs, one at a time mixing in each one carefully to keep the texture smooth. After that I added the milk, a little at a time, and again, mixed carefully. Finally I added the alcohol, vanilla and sugar.

If your mixture goes lumpy, don't despare. Pour the mixture through a sieve and then press the lumps through the sieve too.

Place the apple slices into a flan dish

Put the sliced apple into a buttered and floured dish, this is to help to prevent the flognarde sticking. You can take a bit of time to arrange the slices prettily if you like - I'm afraid mine was for the family this time and it all goes down the same way - and fast!).

Then sprinkle with cinnamon. One of the recipes I looked at - 'La Pomme du Limousin, Terroir & Gourmandises', produced by the AOC Pomme du Limousin, listed in the ingredients 1 nuage de cannelle en poudre - a cloud of cinnamon, which I liked. Then pour over the mixture, and bake in a pre-heated oven for about half an hour. It is ready when the mixture is just solid to the touch in the very centre.

You can then dust the dish with icing sugar or granulated sugar and serve with creme fraiche, ice cream or any topping of your choice!

3.3 out of 5 stars from 8 ratings of Flognarde Recipe

We have two wonderful old apple trees in our hen runs which give us a magnificent crop of eating apples. There is a cooker in the peach orchards, and another at the bottome of our hay meadow. From September to December, we have so many apples we don't know what to do with them. If we ever see a press for a reasonable price, we'll definitely be making our own apple juice and cider.

Have you ever made or tasted flognard?

What did you think of it?

Find us in the natural park of Perigord-Limousin near Rochechouart 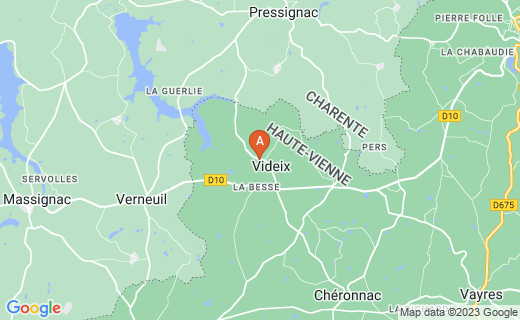