Chabanais fall harvest festival, called Les Journees de la Quintinie is one of the highlights of the year in the Limousin / Haute Charente area. It takes place annually on the first weekend in October. Stalls are open on Saturday and Sunday. This quiet market town is buried deep in the heart of rural France, perched right on the borders of Limousin and the Poitou Charente. The towns of Limoges, Angouleme and Confolens with it's spectacular international music and dance festival are not far away.

Its agricultural roots are displayed every year when the town hosts various shows: a horse show, a cattle show and a spectacular harvest festival where there are wonderful displays of pumpkins, marrows and other squash, Limousin apples, (the famous Limousin Golden Delicious), chestnuts and all sorts of other local produce and traditional Charentaise food and drink. Here you can enjoy the authentic taste of France. There are wonderful French chocolates, sausages, French cheeses, pates, wines and liqueurs.

There are traditional local drinks too. Where better to sample the world famous Pineau de Charente? There's also a wonderful display of local arts and crafts, all of the highest quality. Pottery, paper-making, vegetable carving, painting, jewellery making and sculpture can all be found here. Chabanais fall festival is a veritable cornucopia of food for body and soul.

Have You Been To Chabanais? - Why don't you come and have a look for yourself?

Are you planning to visit Chabanais?

The small, busy market town of Chabanais is situated in the department of the Charentes and the region of Poitou-Charente but it is just ten minutes drive from the Limousin. It is so unassuming a town that you would hardly know it was there! With less than 2,000 residents it's small enough to be quaint; more of a big village than a small town really.

It profits from being on the railway line from Angouleme to Limoges and has a tiny, pretty station. It also has banks, post office, restaurants, an agricultural materials shop and an array of small shops. It has a regular market that takes place near the banks of the river and it has extensive exhibitions halls that are used for displays and events. One such event is the marvellous autumn harvest festival displays this modest town puts on.

On the Banks of the River Vienne

The river Vienne is a tributary of the lower Loire originating as a spring in the department of the Corrze, at the foot of Mont Audouze, near Peyrelevade. From there it wends its way through Limoges and Saint Junien, then passes through the heart of Chabanais and on its way to Confolens just to the north. Finally, after a journey of 372km, it reaches the Loire at Candes-Saint-Martin in the department of Indre-et-Loire.

In the old tongue, Occitan, still spoken by many of the older residents of this area, the river is called Vinhana, and is one of the most important rivers in south-western France. You'll see lots of people fishing from its banks and you can walk along paths on both sides.

The river is wonderfully picturesque and paintable with beautiful buildings and mature trees and flourishing vegetation. It is a picture in autumn!

Where is Chabanais? - In the Poitou Charente, France

Chabanais is in the Poitou Charente region of South West France and very near the Limousin border. It's about fifteen minutes from Les Trois Chenes in Videix. 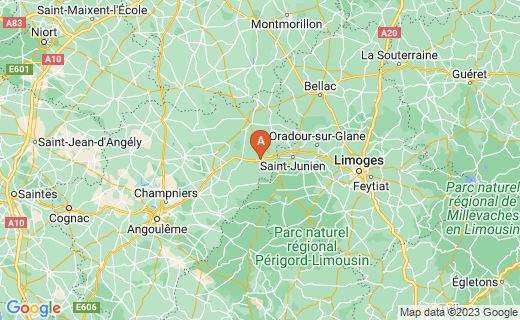 This basket was placed at the entrance of the show and it makes quite a splash. Pity I didn't have a small child or figure in it for scale (next time!) but the handle was about my height - giant sized. you can imagine the size of the pumpkins and marrows.

Now what does ll this have to do with Chabanais? Well, Jean-Baptiste de La Quintinie was born on the 1 mars 1626 in Chabanais, so how very fitting that this vegetable extravaganza is named after him!

In 2013 the town of Chabanais has chosen pollinating insectsas the theme of the festivities. During the two days of the autumn festival, Chabanis, the town that saw the birth of the famous gardener of King Louis XIV will pay homage to pollinating insects , flowers and gardens.

This year Limousin beekeepers will be on hand Saturday and Sunday to offer their specialties and to share their expertise. They will host a panel discussion on the hive , bees , honey and its derivatives. There will be free workshops in making insect hotels which anyone can join in with and, as always, there'll be plenty of flowers, fruit and vegetable displays as local nurseries, growers and gardeners display and sell their produce.

Limousin is famous for its apples

The apple was brought to France by the Romans from Turkey and Iran and it was found that the Limousin region provided them with very similar growing conditions to their origins. The apple flourished here!

Up until the end of the 19th century, the staple foods of Limousin were the apple, potato and chestnut and until 1900 most of the apples were used for cider as poor communications meant that it was difficult to transport them successfully. Making them into cider also allowed year-round consumption as the original apples didn't keep well and wouldn't outlast the winter. With the arrival of the train and selection of varieties, Limousin apples began to be exported all over France as well as Germany, England and North Africa. At this time there were up to 50 varieties of apple grown here, many of which have since disappered.

The variety 'Golden' arrived in Limousin in the 1950's due to the efforts of two men, Guy Chauffaille and Andr Michon, and the apple industry has never looked back. From 400 hectares of orchard in 1960 the industry had grown to 3 300 hectares in 2009.

Signs go up all over Limousin in October inviting you to 'pick your own', and you should certainly go and check out the orchards as many have shops that sell, not only apples and pears, but chestnuts, walnuts and a whole range of regional products. (You have to be realy lazy though to buy chestnuts when you can just go out and pick them up!)

The local Charente government organised this press. They were selling the apple juice for 2.50 euros a litre, about half the usual price for an absolutely fresh and pure product. Of course it was selling 'like hot cakes'.

This area is famous for its cattle: we have miles and miles of flower meadows, unimproved and rich in herbs. This means that the milk is nourishing and cheese making flourishes. Many farms have their own small dairies where they make cow or goat's cheese, and there are always fabulous cheeses for sale at all the small markets in the region. 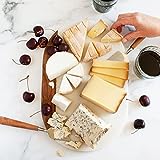 Sweet Chestnuts Were Staple Foods in Limousin and the Charente

You'll see references to them everywhere

Chestnuts, as I mentioned earlier, used to form a staple part of the diet here.

The importance of the chestnut is shown in the magnificent stained glass windows of Limoges station where the sweet chestnut has been chosen as the decorative motif.

You'll see the remnents of the old chestnut days everywhere you go in this region - every now and then, dotted around the countryside, you'll see little round or square buildings called clediers, where the chestnuts used to be dried. The local people would then make a flour from them. Even today you'll find them on sale in the supermarkets either fresh or tinned, and they are incorporated into the black sausages that are also a traditional local food.

One of the best things that you can buy though, is a delicious chestnut liqueur. Cheers! More festive food for the Christmas hamper!

Not just fuit and veg!

As well as food, there's often an extensive range of artwork and craftwork on display at any French festival. Some are traditional, some commercial and often of varying quality. At this festival, though, there were some exquisite ceramics, hand made papers, sculptures, paintings and jewellery for sale. The vegetable carving shown below bridges the gap between food and art very nicely.

Vegetable Sculptor: Amazingly beautiful sculpted, carved and arranged fruits and vegetables. Max Timbert also hold classes where you can learn the craft of carving fruit and vegetables yourself.

These papers were amongst the most beautiful that I've ever seen; natural, hand-made and incorporating a wide variety of plant materials. Annie has created the most delicate textures and colours in her paper. The only problem I would have is that they are too precious to use! I would frame them behind glass and put them on my wall.

Pineau de Charente is on Sale - A Charentaise speciality

Pineau is a fantastic drink that is local to the Charente area and that many local people still make. Nice as apperitif, but is also served here with fois gras, or liver pate.

Pineau is made from brandy or eau de vie and grape juice, amongst other things, and local people still produce it themselves; you often see hundreds of bottles stashed in garages around here. If you go to any of the local, communal meals you might be served pineau with melon. The seeds of a small Charentaise melon are scooped out and the cavity is filled with pineau. A wonderfully simple dessert.

Image: My Bread and Butter Pudding with a Limousin Twist

Traditional French Recipes from the Poitou Charente and Limousin Regions of France - Local specialities are always the best!