Mince Dishes - How to Cook with Ground Beef

Ground beef is the most versatile meat you can buy.

As well as being cheap you can make loads of different tasty, nutritious meals from just 1lb (450g) ofground beef.

Here in Spain they sell it in pre-packaged containers of 1 kilo each in the supermarkets, from which I can easily make two meals for two people, with some left over.

The downside of the beef here is that it is tasteless and bland, and so you really have to experiment in the kitchen with herbs and spices to brighten it up and give it some sadly-lacking flavour.

The difference in flavour between grass-fed ground beef and the beef available here is like night and day.

There are no grassy meadows in the south of Spain and so cattle are fed dry cattle-feed. This has the unfortunate effect of making the beef almost tasteless.

If you can buy grass-fed ground beef you will find the dishes you cook with them to be so much better.

Scotland is a very green country and so all the beef from cattle raised there are grass-fed, and so the ground beef from Scotland is far superior to that found in a lot of other countries. If you’ve ever tried Aberdeen Angus beef you will know the difference.

This is an age-old dish common in the UK and apparently unheard of in Spain.

It is basically just ground beef cooked in water on the stove, with the addition of brown flavourings like Oxo or Bisto Gravy.

The common method is to fry some chopped onions, add the ground meat and brown all over, then add water, bring to boil and simmer for an hour and half (though some people give it a lot less cooking time).

During the cooking time you can add chopped carrots for added flavour, and when almost ready to serve, add some Bisto powder that you have first mixed to a smooth paste with a little cold water.

The Bisto contains seasoning as well as thickener, and you let the pan simmer for a couple of minutes longer to absorb the thickener.

That makes perfect sense and the end result will be less oily as you won’t need to add olive oil or other fat/oil in which to fry the onion. 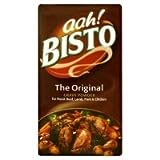 A little hint about the onion.

When peeling an onion, you want to take as thin a layer off the outer coat as you can possibly get away with, as all the ‘goodness’ of any root vegetable is in its outer skin.

Sometimes, however, after removed the brownish outer skin, onions have a thick inedible outer skin that looks fine, but when you try to cook it is hard and inedible, and if you have chopped and mixed it through a dish, it will ruin the food.

To avoid wastage by removing ALL the outer layers, quickly check that your onion is going to be edible by either pushing a fingernail through it (make your nails are clean first) or by pushing a blunt knife through it. If it passes easily, the outer skin is fine, but if it doesn’t, you know to peel another layer away.

You don’t need to waste this outer layer, you can add it to your ground beef whole and safely remove it at the end of cooking time, knowing that its flavour and goodness has been added to your dish.

Ground beef is great served with potatoes, preferably mashed, and a green vegetable or a mix of mashed carrots and turnips.

As I said at the start, the versatility of ground beef cannot be overstated.

You can use ground beef to make a

Ground beef can be:

Ground beef also freezes well, and most supermarkets offer bigger quantities at a cheaper price, so it is worth buying a bigger quantity and separating into meal-sized portions when home and freezing each package individually ready for the next time you need them.

Ground beef can also be cooked from frozen, although you do have to stand over it with a wooden spoon, breaking off each browned outer segment as they defrost.

Oor Wullie is a cartoon character created by printer DC Thomson in 1937 and a strip runs weekly in the Scottish Sunday Post that all the family loves to read. Every second year an annual is brought out featuring all the things Oor Wullie gets up to, and which every child wants Santa to bring in their stocking. Oor Wullie's favourite meal is his maw's mince and tatties.