How Do You Appreciate a Good Scotch?

Christopher Peruzzi enjoys the odd drink every now and then. Enjoying a nice scotch or a good Guinness is one of his guilty pleasures.

So… You’ve decided to Try Scotch?

When I think about this I always think of my own road toward scotch appreciation. My first scotch experience was not good. I blame myself. What else can I say? I was young and stupid. I was in my early twenties and went away with a bunch of friends. One of them had a bottle of Dewars and I tried some of it.

I thought it tasted like iodine mixed with apple cider. I really couldn’t get that taste out of my mouth or in my mind. It was terrible. At the time, my drinking was limited to beer, wine, and sweet mixed drinks. I just thought that of the many spirits out there, I could probably go the rest of my life without needing to drink scotch.

This is the way of things.

Show me a twenty one year old kid and I’ll show you a kid that has either had a bad scotch experience or doesn’t drink scotch at all. It’s really not their speed. Kids that age go to clubs and drink beer or stupid things. They aren’t ready for scotch.

I had heard later on that only scotch drinkers drink scotch. So I asked, “Well, how do you become a scotch drinker, then?” He said, “You drink a lot of scotch.” There was a lot of truth to that statement. I just thought the thought of having to acclimate myself to a drink was pointless.

Years pass. I’ve married and bought a house. I was outside one day and talking to my next door neighbor who was telling me of a scotch tasting party he’d gone to. To be polite and to follow the rules of “How to Win Friends and Influence People”, I asked him to tell me more about it.

“Oh, it was great,” he said. “We started working with the single malts and then the host added some water to the scotch and it changed the taste completely.”

“Yeah, it was like getting a chance to explore the character of the scotch and really understand more of what was in it.”

This is how alcoholics are made. I listened and was intrigued. Perhaps I should give scotch another shot. After all, I was forty-one at the time. What could possibly go wrong?

What could go wrong is “listening to idiots”.

If you decide you want to truly enjoy scotch you should do some research first. Fortunately, we have the internet now. That doesn’t stop a lot of people from asking ill-informed friends about how to pick a good scotch.

Just like you shouldn’t be intimidated by some kind of snooty waiter or part time sommelier with an attitude. They can’t tell you what you like. They may be able to give you an appreciation of the drink or, in the environment of a tasting, ask you what you find interesting about it.

Buying a good scotch is like buying a good car. You do research. When you buy a new car, you have a good idea of what you expect from your driving experience. You take a car that you plan to buy on a test drive and if you like the way it handles, you buy it.

For scotch, I suggest either going to a good scotch tasting event. This might run you about $30 to $80 a person (sometimes they include a meal). The advantage is that you'll get to drink many types of scotch and get a good appreciation for the taste.

In New Jersey, you can usually find an organization in your neck of the woods. I’ve found through my research that Hoboken is a hot spot for such tastings, although I know that there are places in Monmouth County as well. Check your listings. When you think about it, it’s a great guided tour for your taste buds and will give you an appreciation to all the elements of scotch.

If you’re an impatient soul… and most of us are… you might want to go to one of your higher end bars and sample a few shots of what your bartender has. Just make sure that you ask for a specific brand. If you just ask for “scotch” they will give you the cheap stuff and charge you full price for it.

A friend of mine gave me some interesting drinking advice regarding scotch. “Start the evening with a good scotch. After that first really good glass, it really doesn’t matter after that. Once you’re inebriated with scotch, that’s about as drunk as you’re gonna get.”

While I do agree that you should enjoy some good stuff first, I won’t say that anything after that “doesn’t matter”. I prefer to start the evening out with a good scotch and move to an adequate scotch afterward. As far as inebriation is concerned, I think you get a “nice even keel”.

Enough to loosen the tongue a bit.

However, I digress. There are a few things you really do need to know about scotch. They are:

As a drinking adult, do you enjoy scotch?

Scotch drinking and scotch tasting are two different things. When you go to a tasting you use a nosing glass. It looks similar to a wine glass (like a tulip). Observe the color – it should be a golden color (some scotches are darker than others). You hold the nosing glass by the bottom under the stem. You pour a small bit of scotch in the glass and twist it gently within the glass, making sure to coat and spread the aroma within it.

You can observe its legs by watching it drain back to the bottom and whatever was coating the glass will make “lines” going down. Older scotches have thicker legs. Then you stick one nostril into the glass and inhale softly with one, breathe out, and then you inhale again in the glass with the other.

Once you’ve set a bit of expectation to your brain on what the scotch is like, sip it and let it stay on your tongue a bit, allowing it to find all the taste centers on it – sweet, salty, earthy, and bitter. Note some of the flavors. Some have an oaky taste and some taste of peat. Some have a deep smokey taste through the peat, grain cooking process. All of these flavors go to making a good scotch.

As far as what’s better, it’s a matter of taste. I prefer single malt, myself, but I’ll go for a good blended.

The older the scotch the more expensive it is. Typically, it’s broken down in 3 year, 7 year, 10 year, 12 year, 15 year, 18 year, 20 year, and 25 year. I recommend never getting anything younger than seven and preferring anything in the age range of fifteen and up. You can expect to pay in the neighborhood of $40 a bottle for a fifteen year old bottle of scotch and usually around $200 a bottle for a twenty-five year old. I find the taste of the older scotch’s smoother.

Those of you looking for a good commercial blended scotch can usually rely on a bottle of Johnny Walker and all of the colors that mostly go with age. 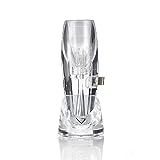 To me, drinking scotch is a good way to kick back and relax. Sometimes I drink some when I can’t fall asleep. Scotch on the rocks for me is somewhat more enjoyable than beer as I have a tendency to drink it slower. And, like my friend said, “it’s as drunk as I’m gonna get.”

The point is that drinking scotch is an adult activity that takes a bit of time and discipline and gives the drinker a modicum of appreciation for the time, effort, and reward of years of work. Show me a twenty five year old scotch and I’ll show you a work of art. Show me one that has won prizes for the year it was bottled and I’ll celebrate by drinking some.

I know I’m doing something for their marketing department but I can say that scotch is an older man’s drink. You drink it when you’re ready for something more mature. When you can drink something older than some of the kids at the bar, you know you’ve waited patiently.

It is a drink that can change in accordance to the temperature or what’s mixed with it. Scotch on the rocks tastes different than scotch with water or it neat (without anything else). It is something that should be enjoyed and it is a lesson in patience and savoring things.

5 out of 5 stars from 1 rating of How Do You Appreciate A Good Scotch?