As I write this (April 26, 2009), an alarming new type of flu virus known as H1N1, or Mexican Swine Flu, is popping up around the world. Concentrated in Mexico and the United States so far, Mexican Swine Flu has caused the deaths of at least 68 people in Mexico. The 11 confirmed US cases are recovered or recovering. In the best case scenario, the Mexican Swine Flu will blow over in a few weeks. Currently, it is responding well to treatment by known antiviral medications. However, if the drug mutates or spreads to countries with poor health care quality, there is the possibility of a global pandemic.

H1N1, the Mexican Swine Flu, is an unusual virus because genetic mapping revealed that it may contain genes from no less than four separate strains of influenza: one swine, one avian, and two separate human strains. This kind of "quadruple reassortment" is extremely rare.

When I heard about this particular strain of swine flu for the first time two days ago, I immediately began to wait for news of a possible connection to the agribusiness practice of keeping animals, including pigs, in Confined Animal Feeding Operations (CAFOs), also known as "factory farms". It didn't take long to arrive.

Concerns have long been raised over the possibility of bacterial "superbugs" arising from the overuse of antibiotics on CAFOs. In recent months, there has been growing concern about a form of antibiotic-resistant staph infection called MRSA that strikes both swine and humans. A new and virulent strain of the disease once associated primarily with pigs and pig farmers has spread to the general population.

As a virus, influenza is not affected by antibiotics, whether they are used responsibly or not.

However, the very nature of CAFOs makes them a probable Ground Zero for the development of any number of nasty diseases and parasites.

CAFOs house hundreds, thousands, or even tens of thousands of animals in a confined space, often with limited access to fresh air, exercise, and sunshine. These overcrowded conditions create stress among the animals and encourage the spread of disease among both animals and farm workers. Workers in CAFOS are several times more likely than those in the general population to suffer from chronic respiratory ailments due to inhaling ammonia fumes from animal wastes and dust and dirt particles suspended in the air. Researchers have found antibiotic resistant strains of a number of bacteria clinging to airborne dust particles in CAFOs.

CAFOs also have a tremendous waste management problem. Where traditional farms used animal manure and other wastes as fertilizer for their fields, CAFOs must find other ways to dispose of the massive amounts of waste produced by the animals. One common solution is to keep the wastes in a large lagoon. Unfortunately, in this concentrated form, the wastes produce toxic gases that often result in the asphyxiation of several farm workers per year. The lagoons have also been known to leak into nearby groundwater supplies, poisoning them.

Hog CAFOs are particularly notorious for producing air and groundwater pollution, and for damaging workers' health. They are also dangerous because humans and swine are affected by many of the same diseases, so sick animals can spread the disease to workers, or vice versa.

You CAN contract swine flu even if you have never had contact with live pigs. The virus is now spreading via human-to-human transmission.

Did the Mexican Swine Flu of 2009 originate in a Mexican hog CAFO? It is still too early to say, and may never be known.

However, there is some interesting evidence to suggest that it did.

The outbreak is believed to have originated in the Mexican state of Vera Cruz, where a five year old boy (who has since recovered) was the first known victim of swine flu. Vera Cruz is home to a number of massive hog CAFOs owned by Smithfield Foods, the largest pork producer in the US, under a subsidiary named Granjas Carroll. The farms in the region house over 950,000 hogs in total. Residents of the area have long complained that the farms did not adequately treat their wastes and that air and groundwater pollution have resulted, as well as unusually high rates of respiratory problems in the local community.

A local Mexican official believes the disease vector may have been a type of fly that breeds in pig wastes. For a more detailed examination of this theory, please visit: Symptom: swine flu. Diagnosis: Industrial agriculture?

Other officials have argued that the connection is unlikely, because the pigs on the farms are North American, while the virus's genetic material appears to be Eurasian. Granjas Carroll also claims that no pigs or farm workers have shown symptoms of the disease, but it is still unclear whether any animals or workers have actually been tested. However, a group of Columbia University researchers has analyzed the virus and found that it may not only contain North American genetic material, but may actually be 100% swine in origin, rather than a swine-avian-human reassortment as initially reported.

New Scientist is also reporting that the H1N1 strain is closely related to a strain of swine flu that has been circulating among pigs in the United States since approximately 1998. 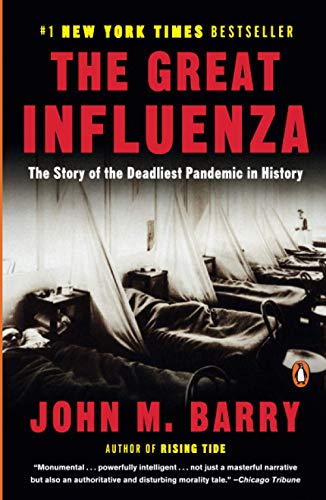 The Great Influenza: The Story of the Deadliest Pandemic in History
Buy Now

In 1998, an aggressive form of flu sickened thousands of hogs in North Carolina. The virus, H3N2, turned out to be a combination of pig, human, and bird viruses, the first "triple reassortment" ever described. The flu quickly spread to hog populations across the United States.

Fortunately, H3N2 never began to affect humans. However, its emergence was blamed on overcrowded conditions in North Carolina's pig farms. That very year, the hog population of the state had reached 10 million animals, up from 2 million just six years earlier. At the same time, the number of farms had dropped from 15,000 in 1986 to 3,600 in 2000, and farms housing 1,000 or more pigs owned 99% of the pigs in the state. Today, the average hog farm houses more than 5,000 animals.

Scientists at Columbia University and several other research instutitions have independently confirmed that the Mexican Swine Flu, H1N1, is closely related to H3N2 and similar reassortments that have been circulating among North American hogs since at least 1998.

Regardless of its origins, H1N1 is now spreading from human-to-human and infecting those who have no contact with pigs at all.