Just add bread & a salad for a delicious no-fuss meal.

"Tossed crab dip!" I announced with a laugh as the hot dish flew from my hands and landed on the deck floor. In truth, I wanted to cry. All that trouble wasted, not to mention the expense!

I'd gotten the recipe from Southern Living, and the list of ingredients was as long as my arm. Not only that, but it had been quite labor intensive.

These days, I know better. When it comes to important dinners and/or expensive ingredients, I stick with easy recipes that are virtually no fail. They take less time to prepare, and they don't leave me as tired, so I'm less likely to "trip up" and make a mistake.

Similar recipes leave out the whole milk, using half & half and whipping cream alone. To me that's not rich, that's nauseatingly rich, which is why I use whole milk and/or chicken broth as well. They make for a lighter dish that's just as creamy and delicious.

As for the crab, I prefer backfin for soup (it's less expensive) and lump for crab cakes.

The following recipe makes enough crab soup for four entrees. If using as a starter course, it easily serves eight.

I hope your friends and family like No Tears Crab Soup as much as mine do.

5 stars from 1 rating of No Tears Crab Soup

The secret to lump-free soup is whisking. First, whisk the milk & dry ingredients together. Then keep whisking while adding them (slowly) to the hot butter. Continue whisking until you bring the soup to a simmer. If the soup starts to boil too fast, take the pot off the heat & (you guessed it!) continue whisking until the boiling subsides. 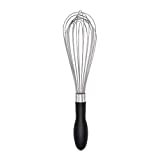 Serve crab soup up right in colorful Fiestaware mugs made in the USA.