Once A Month Cooking Salmon Gizmo Casserole for the Freezer

The History of Salmon Gizmo

As a newlywed more than 26 years ago, my husband asked me if I would make Salmon Gizmo for him. ‘Salmon Whatmo?’ I thought. Who ever heard of a dish called that? Apparently, he thought everyone had heard of it and was surprised that I didn’t know about it. I asked around, and nobody in a three-state radius had ever heard of it. I asked one of his sisters and she said that she remembered it from childhood but she had no idea how to make it. So, I decided to go directly to the source and I asked my mother-in-law, who raised the family in Wisconsin and still resides there, if she had the recipe.

“Of course I have it,” she said. She went to her recipe box and pulled out a well-spattered index card with the recipe for Salmon Gizmo on it. Wisconsin is the land of brat frys and fish boils, two things I had never heard of before meeting my husband. Figuring that Salmon Gizmo was a similar regional dish, I was looking forward to hearing more about the provenance of this recipe.

“Oh, I just heard it on a local radio cooking show one day. I knew I had a can of salmon in the cupboard, so I quickly jotted down the recipe as the radio host read through it,” she said. Thinking that maybe everyone in town heard the recipe, every time we visited her in Wisconsin, I would ask friends and family if they knew of Salmon Gizmo. Nobody ever heard of it. So, this dish remains a recipe that only my husband’s family eats, but maybe that will change after this post!

How To Make Salmon Gizmo

To Make This A Freezer Meal

To make this a freezer recipe, stop after step #8. Instead of baking the mixture, place the uncooked mixture into a self-sealing freezer bag or vacuum seal it. To serve, defrost it the night before in the refrigerator or at least 8 hours before you plan to bake it. Spread thawed mixture in a 9 x 13 baking pan and finish baking as described above. Below is what mine looks like in the vacuum sealed bag.

This Is The Vacuum Sealer That I Use at Home 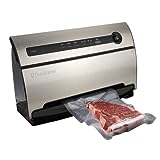 FoodSaver V3835 Automatic Vacuum Sealing System with SmartSeal Technology
I prefer the upright construction of this vacuum sealer. It is more convenient to store.
Buy Now

This Recipe Makes My Rotation Every Month

My family really enjoys this recipe, so I include it in my meal rotation nearly every time I prepare my make ahead meals. I should note that I don't really do my cooking once a month. It actually works out to be more like every 5 or 6 weeks. I prepare about 27 meals in a single day and then freeze them to eat throughout the upcoming weeks.

The reason this works out to that I only do batch cooking about every 5 or 6 weeks is because we sometimes don't eat dinner at home or we eat leftovers. Sometimes we have a sporting event, something at church, an invitation to someone else's home or dinner at a restaurant. Really, I end up preparing about 5 of my make ahead meals per week.

I can't say enough about how much time once a month cooking saves me. In fact, the reason I started this type of meal preparation is because one evening, 12 years ago, when my children were young, I was pulling through yet another drive-thru on my way home from work. I realized that our food choices were terrible. I looked into once a month cooking as a way to improve what we ate for dinner without adding tons of time to my schedule. The two biggest differences are 1) With once-a-month cooking, you do all of your chopping and browning in one day and 2) Clean up after a meal is easier because you haven't dirtied as many dishes.

I also feel that the quality of our meals has improved. We eat many more meals from scratch. I find that I am more inclined to prepare fresh foods, such as salads, since I'm not spending as much time on other nightly food prep. Also, most of my meals are designed so that all I have to add to them is a simple vegetable as a side dish.

I found it interesting that the original recipe called for a one pound can of salmon. Well, it no longer comes in cans that contain that amount. Most cans are 14.5 ounces. The smaller, flat cans are 7.5 ounces. I guess a pound isn't a pound any more.