Summer is a good time to lose weight. It is easy. You don't want to eat when it is hot and muggy. In summer it is easy to lose weight by eating less, since your appetite is usually lower in hot time. This is the best tip how to lose weight.

The best solution for a hot summer day is cold food. From refrigerator.

I grew up in Soviet Union and it is natural, that I am used to Russian cuisine. Though my favorite food is Mediterranean diet, I am more comfortable cooking Russian stuff.

My son's friends love it and they are always ready to come to try my cooking. They love virtually anything I am cooking, even if it is just regular loaded sandwich.

The only thing most of hem do not like is Cold Beet Soup. Why? As one girl put it, "there is nothing there".

That's right! There is nothing much in there, and still it is the most suitable food for a hot summer day. It will not really fill you, but it will refresh you.

How to eat cold beet soup.

How I make Cold beet Soup (with variations)

There are many ways to make cold beet soup. Every Russian cook makes it her way. Cold beet soup is a known food in many Northern European countries. In Poland, Lithuania, Latvia, Ukraine and Belorussia people eat cold beet soup on a hot summer day. Every nation has its own version of it.

I am cooking it the same way my mother and my aunt, and my grandmother were doing it.

To make it my way, you will need:

Cut beet leaves off, but do not discard. Peel and chop one beet. Peel and cut potatoes in medium cubes. Peel an onion. You may chop an onion too, if you like.

Boil beet, beets leaves, potatoes and onion in a medium pot until cooked. Add salt and pepper according your taste. I usually throw an onion away after the vegetable broth is done, because I do not like boiled onion (that's why I cook an onion whole). But if you like it, you may cook onion chopped. Also, I throw away the beet leaves- they did their job, they added flavor.

Let the soup cool completely and put the pot into refrigerator.

Sometimes I cook beets whole and then grate them, this way you get more nutrition from beets. Also, I boil potatoes separately sometimes and add to the plate, this way potatoes stay white. You may do any way you like, the result is same- YUM!

Peel half fresh cucumber and cut it. Put it into a plate. I have a special trick to add some flavor to my cold beet soup- I smash cucumber with a bottom of a clean glass. Not too much, just to make some "juices". Peel and chop one hard boiled egg. Add into the plate. Add cold beet soup from the refrigerator. Add chopped fresh dill or dried dill weed. Also, you may add chopped fresh green onion. Add a teaspoon of sour cream, mayo or butter milk (whatever you like most). The soup has a very appetizing pink color.

You can eat cold beet soup wit a toast, or with pirozhki!

There is nothing better on a hot hot day than a healthy cold beet soup my way!

Recipes from My Russian Grandmother's Kitchen: Discover the rich and varied character of Russian cuisine in 60 traditional dishes
Buy Now 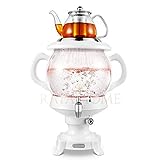