Should I eat meat? That is the question!

Why on earth am I tackling this topic?

The link you will see if you look to the right will take you to the excellent hub (by Mr. Happy) that inspired me to write this one. In that hub there is an eloquent defense of meat eating. Or at least a slap in the face of those zealous vegans who try and thrust their views upon others. I agree with him that those vegetarians who enjoy looking down on meat-eaters are irritating. I also agree that the vegan ideal can be ridiculous in its extremity. I do not, however, agree with his defenses of meat-eating... and I eat meat!

To the matter at hand...

This is a topic that is on my mind a fair bit at the moment. I have been a strident defender of the carnivorous trend for most of the years of my life. I am slowly changing, however. I have (admittedly slowly) begun the painful process of weaning meat out of my diet. I'm never going to completely give up meat - and I certainly won't ever expect people to prepare specially meat-free food for me if I come round for dinner... but I would like to create a lifestyle for myself that doesn't dangle meat in front of me all the time.

I am a thinking man, and for years I have come up with lots of very good reasons to throw at vegetarians that explain why they're foolish and why I should be allowed my steak thank-you-very-much! I have come to the painful conclusion however that the vegetarian question is a very simple one to answer.

Nobody should deny that if it is necessary for health or survival in your living circumstances, that eating meat is fine and natural. However, it is different when it is not necessary for health or survival. I confronted myself with the question in brute honesty... do I think it is morally acceptable to cause pain or kill an animal with a highly developed nervous system capable of suffering and being aware at least to some degree of what is happening to it... if none of that is necessary? What reason do I honestly have for eating meat other than the fact that I really enjoy the taste? (And god help me I really do!) Could I say in plain terms: I believe it is morally justified to kill and eat a cow because I like the taste of cows?

I have to admit that it doesn't sit well with me. When it comes down to it... I don't enjoy thinking of other living things suffering and dying for the sensual pleasure of a haute cuisine dining experience. If thinking of it is bad, what about the reality of it? This is real! I have done this many times, and indeed against my own moral implications continue to do it! I choose the delicious steak fully cognisant that a young animal has been slaughtered for that experience to take place.

I used to be proud of the fact that I knew in my heart I could do this. I could take responsibility if I needed to... I could take that life in order to feed myself. With this accepted - I had no issue with eating meat. We had evolved to be an omnivorous species - meat was part of our natural diet! Or it had been for a good few hundred thousand years or so.

Great ideas for cooking with veg

Instead of continuing to pat myself on the back for my own cleverness and allowing myself some moral comfort I encountered someone that moved the goal posts. My fiancé, Ashley. We met on the day of the Royal wedding at a street party nearly two years ago. From the moment we met we have had the most fantastic level of conversation that never dries up. One of the conversations has been about the eating of meat.

At the time of our meeting Ash was a lapsed vegetarian – an occasional meat eater who had been a full vegetarian for years. She slipped into old ways and habits partly through my influence. She didn’t want her views to be an impediment to our developing relationship, I think. That didn’t stop her from voicing her opinions though – and I welcomed it.

I tested her opinions with my arguments – and for once listened to the vegetarian point of view without derision. It was the growing love I felt for her that enabled me to open my mind to her different perspective. That isn’t to say I was instantly swayed – or that our thoughts completely align even now. It is important I think to maintain independence of mind even when allowing oneself to consider holding a different standpoint to that which had been held before. However, the upshot of our conversation was that I began to see how my arguments for eating meat were essentially flawed. They were flawed because I had chosen an outcome that I wanted (i.e. that eating meat was fine) and was developing arguments to make the world fit that view. I was making justification for a position using arguments that were made biased by my own desires. It was no better than a sex addict justifying his habit by saying that it was natural – that it was because of evolution… Bollocks.

All this being said and done I am still in the process of making this positive change to my diet. I live in a society where ninety percent of the population have a meat addiction and have had many years to develop their linguistic systems of self-justification. The fact that so many people follow the same behaviors, does not justify continuing to do them. It is the duty of each member of our growing global community to take responsibility for their own actions and be more aware of their impact on the world and its inhabitants. There is an exponentially increasing number of voices that speak with compassion and respect for not just your fellow man, but for all living things.

Now that I have come to this revelation it has enabled me to cast aside my illusions. I live in a society where it is not necessary for me to kill beings capable of experiencing pain and suffering in order to survive. I am continuing to do so because I have a meat addiction that is reinforced constantly by the culture I live in. I am thus trying (and boy is it trying!) to wean myself off the stuff.

There is an argument mentioned in the hub that started me off on this little moralistic rant. That is the old 'What about plants? They're alive too?' argument - I used to use it and it ain't fooling anyone. Let's be honest here. When was the last time a plant screamed in pain or tried to run away from its predator? I don't mind eating plants - they have no nervous system... no pain... no consciousness to any degree. It's a silly comparison and it just doesn’t hold up.

It is quite funny though. I remember once going round to dinner at a vegetarian friend’s place. He served some ‘baby’ carrots to a mutual friend’s feigned horror. Much hilarity ensued…

So…I continue to attempt to mend my ways, and continue to engage in the debate. I’d be more than interested to hear any rejoinders or alternative takes on this hot topic. So please feel free to make your opinion known. Thanks for reading. :)

Links to other pro veggy hubbers...

And in the name of balanced representation... 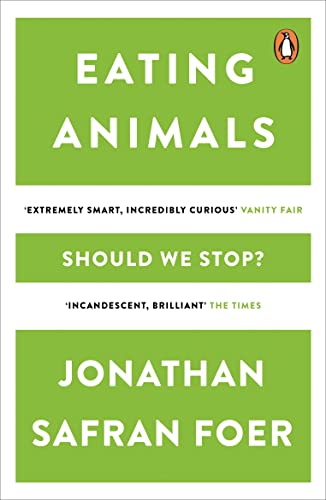