Cast your vote for Eggplant in Chili Garlic Sauce

For those of you who like meatless recipes, here is one for eggplant in chili garlic sauce. It contains both chili peppers and chili oil and a lot of garlic, but it is really not overly hot. Of course you can always cut back on the heat. I don’t like really hot food and I find that it is not too hot for me.

Although you can buy chili oil in stores now, I recommend that you make your own to control the strength and to make certain that it is fresh. It will last for years if placed in a small jar and refrigerated

You will probably see several different types of eggplant in a Chinese grocery store, but I just use the regular purple ones from the supermarket. Make sure that the skin is shiny and not wrinkled because I just wash them and leave the skins on. Just cut them crosswise into ¾ inch thick slices and then cut each slice into one-inch squares.

Some people cook the whole eggplant before cutting it up but I prefer to blanch the cut-up cubes for about 3-5 minutes in boiling water so that they retain a little texture. Drain them and stir-fry them while they are still hot.

Before you start, you need to make the chili oil. In China, peanut oil is often used, but in America, corn oil or soybean oil works just fine and is a lot cheaper. Don’t use olive oil because unless it is very highly processed, it will impart a foreign odor to your cooking.

6 Cloves of Garlic peeled and minced

3 Scallions cut into pea sized pieces including the green part 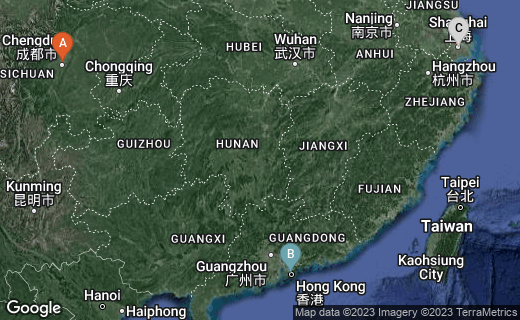