Eating out in the south of France can be such a pleasure, where even the most unassuming looking of places can serve up something really unexpected and delicious. But if you’re in the mood to splurge and enjoy a gastronomic experience to remember, the following are some of the region’s most revered restaurants. Remember, eating out in France does not have to cost you an arm and a leg – even the top restaurants have special set menus, chef’s menus and weekday lunch specials. If you choose wisely, you can enjoy all the ambience and luxury of a top, Michelin-starred restaurant, without remortgaging your house or melting the credit card.

Here, in alphabetical order, is my list of ten of the best:

A ten room, four star hotel whose restaurant has been awarded a Michelin star, chef Alain Llorca’s eponymous establishment is tucked away in the village of La-Colle-sur-Loup, with views across the valley to its more famous neighbour, St-Paul-de-Vence. The setting is glorious, with tables both inside and on a spacious double-tiered veranda. The menu is contemporary Mediterranean, combining fresh fish and lobster dishes with grilled lamb, steak, duck and pigeon. The set menus range from lunch for 38 euros without drinks, through to the lobster menu at 130 euros. Llorca’s brother, Jean-Michel, is a pastry chef who provides the delicious desserts, as well as serving sumptuous afternoon teas.

Located just outside the perfume city of Grasse, this restaurant was only opened in 2009 but has already collected its first Michelin star. It’s family-run and small, with only 15 covers, and boasts a menu inspired by Provence and the Mediterranean, that changes every three weeks. A three course lunch menu can cost as little as 30 euros a head, while a full-on eight course dinner will set you back 80 euros without wine. The a la carte menu is small but beautifully formed, including delicacies such as foie gras with rhubarb, tenderloin of beef with wild garlic and crayfish, and a ‘revisited’ lemon tart for dessert. The dishes are served with artistry and elegance.

Don’t be deceived by the name – this is, in fact, one of France’s most renowned seafood restaurants, located on the Cap d’Antibes in the beautiful coastal town of Antibes. Owned and managed by the Sordello family, this restaurant has been going for sixty years, from its simple origins of serving up Pan Bagnat, the Nicoise tuna sandwich. Next it became an open air café specialising in Bouillabaise, the world-famous fish soup/stew, as well as fried fish. By 1978, with the help of the chef Serge Philippin, it had become a gourmet restaurant, and was awarded its Michelin star in 1979.

Theirs is an extensive and exclusively seafood menu, with a wide range of dishes, depending on availability. They offer a special lunch menu of 55 euros, and a dinner or lunch menu of 85 euros. It’s their Bouillabaise of which they’re the most proud: it comprises a stock made of small rock fish, served up with large fish as well as green beans, artichoke hearts and tomatoes. At 125 euros per person it’s one portion of soup you’re unlikely to forget! 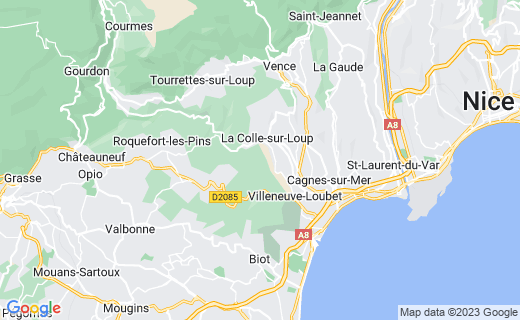 Located between Nice Old Town and the Promenade des Anglais in Nice, this one Michelin-starred restaurant specialises in ‘market food’, using seasonal Mediterranean produce, set in a contemporary atmosphere. There’s a choice of five different set menus, from the Menu Plaisir of 35 euros, to the Menu Gourmand which is only available in the evening and costs 69 euros. There’s even a two course, weekday only lunch at an extremely reasonable 23 euros per person. The emphasis is on fresh seafood, locally-sourced meat and interesting combinations, such as truffle risotto with friend scallops, or snails with Iberian ham.

If you’ve got money to splurge and you revel in old-world charm, this is the place for you. The restaurant of the Negresco Hotel in Nice, this is one of the French Riviera’s two-Michelin-starred restaurants.

Chef Jean-Denis Rieubland provides a small a la carte menu, inspired by Provence and served in the great tradition of French gastronomy. This includes snails in puff pastry for 32 euros, with main courses ranging from chicken with duck foie gras (68 euros) tolobster (72 euros). There are three set menus – the full-on ‘discovery menu’ is a mere 140 euros without wine, but otherwise there’s a set Menu Chantecler at 90 euros and a Sunday lunch special at a relatively inexpensive-sounding 58 euros.

Located in the lovely and discreet medieval village of Tourrettes-sur-Loup, this restaurant only opened its doors in 2008 and was awarded a Michelin star in 2012. Using locally-sourced, organic produce, Chef Julien Bousseau trained at Michelin-starred restaurants in Paris and the south-west, before moving to the Caribbean, where he worked in a luxury hotel on Anguilla. Some of his dishes reflect that Caribbean influence, while others offer surprising and unexpected combinations, such as sea bream fillets marinated with strawberries and lime. Two courses will set you back around 35 euros, while the full-on Degustation (Tasting) Menu is available for 62 euros without wine. The restaurant is small, with tables outside during the summer, lovely interior stone walls, oak beams and changing art exhibitions by local artists.

The Colombe d’Or might not have any Michelin stars, but it’s a must-visit restaurant all the same. Set in the picturesque village of St-Paul-de-Vence, it started out in the 1920s and soon became a favourite among artists, many of whom paid for their meals with their paintings! As such, it boasts one of the best art collections in the region outside of a museum, with fascinating sculptures and paintings by the likes of Miro, Braque and Chagall.

The menu hasn’t changed in years, and is traditional and very reasonably priced. A classic is their house starter, which comprises seemingly endless platters of vegetable dishes, pulses and charcuterie. In the summer, the garden area overlooking the pool is just gorgeous, and a great place for celebrity spotting.

Another Michelin-starred restaurant to be found in a discreet village not normally on the tourist map, this one is a small hotel with five rooms, located in a chateau in the village of Le Bar-sur-Loup. The restaurant offers seasonal dishes using locally-sourced produce in a pretty, rustic yet sophisticated atmosphere. There’s a choice of four set menus, from the 32 euro Lunch Menu to the five course 95 euros ‘Lasting Menu’. Dishes are elegantly and artistically served.

This is the other two-Michelin-starred restaurant, located in Menton, arguably one of the French Riviera’s loveliest coastal towns, near the Italian border. Its atmosphere is one of restrained, sun-filled elegance. The Mirazur boasts lovely gardens, where they grow herbs, citrus fruits and vegetables, including unusual varieties such as golden ball turnips, yellow beetroot and purple shizo.

Chef Mauro Colagreco has created a menu based on fresh, seasonal produce, including freshly-caught fish and meat from the land, and of course his own organic vegetables. Three courses will set you back 85 euros, but there are set menus from as little as 45 euros up to 135 euros a head.

There is also a shop where you can purchase such delights as lemon and ginger olive oil, baskets of fresh vegetables or tomato jams – ideal gifts or reminders of a wonderful experience.

Set just outside the pretty town of Mougins, north of Cannes, this four star hotel and former mill boasts six rooms and three suites. There is also a culinary school, a shop and a salad bar. The restaurant’s cuisine is imaginative Provençal, for example scallops with carrot and lavender purée, or sea bream with sweet red pepper preserve. Meat dishes range from veal kidneys to duckling with peanuts and lemon preserve. The restaurant is large, elegant and glamorous, and their set menus range from 60 euros to 110 euros.

If money were no option, which restaurant most appeals to you?