Tips and Measurements for Substituting Dried and Fresh Herbs in Recipes 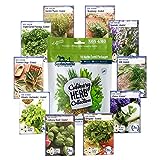 A large percentage of the recipes that you will use in your cooking will require that you include some herbs. The recipe will specify whether you should use fresh herbs or dried herbs. Can you substitute one for the other? And how do you make that substitution? Follow the tips in this article to get a basic understanding of when and how it is okay to substitute dried herbs for fresh herbs and vice versa.

In most cases, you won't have any problems substituting dried herbs in recipes that call for fresh herbs. However, there are exceptions to this rule. If a fresh herb is a major ingredient in the taste of the recipe then you do not want to substitute dried herbs for fresh herbs. For example, a tabbouleh recipe will require large bunches of fresh mint and fresh parsley. This makes up a major portion of the recipe. Likewise, if you were to make a tomato, basil and cheese sandwich then the basil would be a large portion of that recipe. In this examples, you would get a totally different taste for the dish if you tried to use dried herbs. The rule of thumb to keep in mind here is that if a recipe calls for fresh herbs that are just to add seasoning then it's okay to substitute dried herbs but if the fresh herbs are a main ingredient of the recipe then you don't want to make that type of substitution.

It's Generally Fine to Substitute Fresh Herbs for Dried Herbs

You shouldn't have any problems doing the reverse substitution. If a recipe calls for dried herbs and you want to use fresh herbs, there is typically no reason not to do so as long as you use the proper amount (see below). A major exception to this rule is when a recipe calls for ground ginger; fresh ginger tastes much different and often cooks differently so you want to be wary of making this substitution.

If you are going to make the substitution then you need to understand that you won't be using the same amount of fresh herbs as you would of dried herbs. This has to do with the concentration of taste which changes when you dry herbs as opposed to when you eat them fresh. The taste of dried herbs tends to be stronger so you use less dried herbs than fresh herbs. Tips for converting the measurements in recipes that you may be working with include:

Some Additional Tips and Thoughts About Using Fresh and Dried Herbs
There are many different reasons that you might make the substitution of fresh herbs for dried or vice versa. Maybe you're growing fresh herbs in your kitchen and want to use them. Or maybe you bought a big bundle of fresh herbs and they'll go bad if you don't use them soon (although you could always dry them yourself and use them later). Perhaps you are traveling and it's easier to take dried herbs with you than fresh herbs. Whatever the reason, it's generally fine to make these substitutions. Here are just a few more thoughts and tips about doing so:
Hopefully this helps you when using herbs in your recipes!