How To Separate Egg Whites?

How To Separate Egg Whites

Is there any food more useful than the humble egg? It’s packed with nutrition, and an excellent source of non-meat protein. Egg is yet another source of vitamin D and that vitamin primarily helps in maintaining the blood levels of your body in the shape of minerals like phosphorus and calcium. Eggs contain a high volume of sulfur, as well as other vitamins that improve the growth of hair and nails. Adding eggs turns flour and water into cake; it turns a simple soup of broth and noodles into a healthy meal.

The two main parts of the egg are the white (where all the protein lies) and the yolk (where the healthy fat lies). In most recipes these work together harmoniously without a problem, yet they each possess distinct qualities that can benefit foods as well so sometimes it’s necessary to separate them for certain recipes.

A number of recipes require egg yolk or egg white only as an ingredient. In order to come up with the right recipe, it becomes important to separate egg white from its yolk. Some recipes need the fat of the yolk, but do not benefit from the liquidity of the white part. On the other side of the spectrum, when you want to make certain foods light and fluffy and full of air—such as soufflés and angel cake—you need to whip the whites into a frothy foam. The heavy egg yolks would prevent this from happening and break the whites down again, causing your egg or pastry dish to fall.

You can use different methods to separate egg white and egg yolk to be used in different recipes. All of these methods are very simple and becomes very easy for you once you get practice over them. Just try them and stick to your favorite method.

How To Separate Egg Whites

Method 1: Cracking The Egg In Bowl

First method to separate egg white is very traditional, which is widely used in houses. This method is complicated at beginning, but when you are used to it, you can easily separate egg whites by this method. For this, you need egg and a bowl. Crack egg by hitting it on flat surface or on edge of bowl. Crack it gently from middle of the egg. Now roll the egg so that crack is facing up. Use both of your thumbs to open the egg from crack. The crack will allow you to divide egg into two shells.

Remember when you open up egg from crack, keep bowl right under the egg. When you open egg, yolk will stay in one of the shell halves, and some of the white will fall into bowl as well.

Cradle the yolk back and forth between the two shell halves once or twice, each time letting the excess whites slide into bowl. You can then empty the egg yolk into a separate bowl.

Here you have to be very careful, because if yolk gets an edge of shell, it will become difficult to hold yolk in shell.

Method 2: Cracking The Egg In Hands

Second method for separating egg white is relatively easy; you will crack egg with one hand, and pour the contents onto your other hand. Do this over a bowl. Your hand should be in a cup position so that all the white go down in bowl from the space of your fingers, and yolk is left in your palm. You can easily separate all the white into bowl and keep yolk in other bowl.

For this method, you should wash and clean your hands carefully.

Method 3: Cracking The Egg With Tablespoon:

Third method for separating white is quite interesting as you open up egg and put all into a bowl. Now, take a tablespoon and lift up yolk from bowl. Transfer it to another bowl. Some part of white will go with it, but that is not an issue. A little white in your yolks won’t hurt them; but a little yolks in your whites can destroy a recipe!

This method takes some practices as it’s very easy to burst the yolk and have it run together with the egg white. Once that happens, you cannot go back and separate them. But if you don’t like directly handling the egg, and prefer not to get it all over your fingers, you might prefer this method.

Fourth and last method is to use egg separator. There a large number of egg separators available in the market. They come in different styles under the name of different brands. An egg separator works by cracking the egg itself with a little push. The yolk falls in the container and white goes down in bowl from container slots. This is by far the easiest way to separate egg white as well as egg yolk. For those who tend to come home and cook in a rush, who lack patience to carefully separate the egg by hand, or for those who might have butterfingers in the kitchen and always break your yolk, this may be your preferred method.

Tip: Have leftover yolks or whites from a recipe? Put them into an ice cube tray, freeze them, pop them out and put them in a zip-lock bag. You can thaw them and use them for other recipes in the future. They’ll keep for months!

How To Separate An Egg :3 Different Ways

Tip: Have leftover yolks or whites from a recipe? Put them into an ice cube tray, freeze them, pop them out and put them in a zip-lock bag. You can thaw them and use them for other recipes in the future. They’ll keep for months! 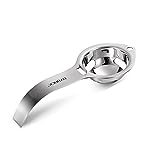 My Food and Cooking Hubs