Why Paul McCartney is vegetarian

Paul McCartney is known today as much for his work to promote a vegetarian diet as he is for being a musician. It might seem unbelievable to you (it is to me) that there are kids today who wouldn't recognize a Beatles song if they heard one. Amazing, really.

But the chances are that they have still heard of Paul. For my generation though, it's different.

There was a time when he was probably the most famous musician in the world. Now, he's probably the world's most famous vegetarian. But it wasn't always that way. He was brought up in a similar way to me - I guess it was typical of a Northern England upbringing - with a mum who cooked and fed her family on a budget to the best of her ability. But it was more difficult for Mary McCartney to feed her husband and two sons because both boys were born during the Second World War and food rationing continued even when the war was over. Food rationing eventually stopped in Britain in 1954.

The story begins in a small council house in Liverpool...

This photograph shows 20 Forthlin Road, Allerton, Liverpool - and little did Jim and Mary McCartney know that one day, their small home would be preserved by the National Trust; a UK organization that preserves and cares for buildings of historic significance.

In the kitchen of this little house, Paul's mother would cook what was then a pretty standard menu for her family. He recalls that the food highlight of their week was the Sunday roast - always served in the north with lots of vegetables, potatoes and Yorkshire Puddings to make the precious meat go a little further. If the household was anything like ours dad, the breadwinner, would have the lion's share of the meat.

I had to chuckle when I heard him describe their Sunday dessert, because that's exactly what my mum used to serve - more Yorkshire Pudding with the famous Tate and Lyle Golden Syrup - that brings back memories!

Between 1957 and 1966 he spent most of his time on tour with the Beatles. He rarely thought about food at the time; he saw it as mere fuel.

His only brush with vegetarianism was when he became aware of the restaurant Cranks, which had opening on the trendy Carnaby Street in London in 1961.As far as Paul was concerned, Cranks was a great name for the restaurant because this was how people who didn't eat meat were largely seen in those days - as being something just a little weird and, well, cranky.

It was in 1968 that the Beatles famously traveled to India to study meditation with the Maharishi Mahesh Yogi. They found themselves in a Hindu holy city where a vegetarian diet was not only accepted, it was followed for religious reasons. Beatle Ringo Starr left early, missing his English food. Fellow-Beatle George Harrison was the most affected by the trip and stopped eating meat and fish almost immediately, but not Paul.

In 1969, teenage his fans all over the world were devastated when their hero married. Linda was American and had a child from a previous marriage which angered the fans even more.

But it soon became evident that they were a very happy couple and fans soon 'forgave' him for 'betraying' them.They had children and settled on a farm in Scotland.

Many people believe that it was Linda McCartney who persuaded her husband to become vegetarian but that wasn't the case at all. Paul recounts that one day, they were having lunch and watching the newly born lambs though the window.

He says that they were full of 'the vibrancy of new life'. He says that he and Linda realized what they were eating for lunch - leg of lamb. They said 'should we try not doing this?'They decided there and then to adopt a meat-free way of life. 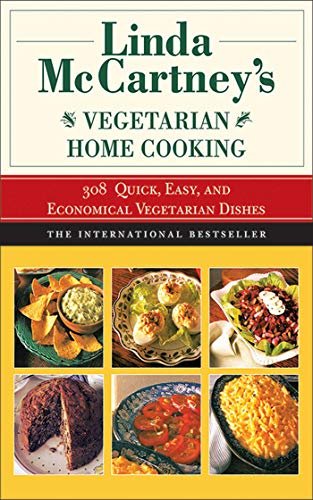 Linda McCartney's Home Vegetarian Cooking: 308 Quick, Easy, and Economical Vegetarian Dishes
Linda McCartney and Paul decided together that they would stop eating meat. Linda threw herself wholeheartedly into their new way of life and published several excellent recipe books. This is my favorite - quick, easy & economical says it all...There's no doubt that the McCartneys had no financial worries but both had been brought up to be frugal.
Buy Now

Adapting to a new way of life

This was all very well in theory. Linda had been brought up eating similar meals to Paul - a chunk of meat along with vegetables.

She was a good cook but by cutting out meat, they found that there was now, in Paul's words 'a hole on the plate' - the place where the meat would normally be.They had the usual dilemmas that new vegetarians face, such as what to serve at Christmas?

The two started to experiment and had a lot of fun doing so. Because they had been meat eaters all their lives, and because he was the typical northern male who did 'blokey' things like carve a joint of meat, they developed their own meat-free meals to serve at home.'We ate some pretty goofy things' he says but adds that the cooking experiments were great fun (they devised a macaroni turkey for Christmas!) and that it wasn't a case of 'ew, we're vegetarian now, life's ended.'

Together, they embraced the challenge.

Not eating meat was still thought of as being a little weird in those days. People would ask Paul why the family had made this change in their diet and he would explain about the lambs and their compassion for animals. But he looked more into this way of eating - after all, the couple had young children and the couple wanted to make sure that the kids were adequately nourished.

They found out about the beneficial health benefits of not eating meat. Gradually, this led to them learning more about the impact the meat industry has on the environment.

They continued to make their own meat-free meals at home and decided to form a company manufacturing them. To quote Paul, he says that people could 'stick these in your freezer for when a veggie comes round'.

Although the McCartney name initially popularized their food range, people were delighted to know that meat-free foods could actually taste good!

Today Paul is a father and a grandfather. He lobbies officials and lets them know about his beliefs in the vegetarian way of life.

He describes how his research has shown him that the meat industry is ultimately bad for the planet. He is concerned about the rise of American-style fast foods in Asian countries. Their traditional meals are healthy - and yet now these countries are adopting our ways.

He hopes that this is a fad and just as we are turning against unhealthy food in the west, then the Asian countries too will follow our lead.Paul McCartney's strong Liverpool accent that was evident in the days of the Beatles is more mellow these days when he gently airs his views. He doesn't expect to change the world.

Linda, mother of four children, died of breast cancer in 1998 at the age of fifty six. Since that time, Paul has donated millions - literally - to cancer charities. And after her death, he suggested that if others wanted to commemorate her life they could do so by also donating to these charities.

He also added that the best tribute would be to 'go veggie'. I do hope that this has made a difference and that people took him at his word - what a lovely way to celebrate the life of a lovely, compassionate lady.

In January 2013 it was announced that Paul, along with Elvis Costello, also a long-time vegetarian, has re-recorded one of the early records he made with Linda. Although Linda regularly performed with Wings, the band that he formed after leaving the Beatles, this album is the only one that credits them both.

Paul and his family are still involved in the food company founded by Linda and hope that this re-released album will help to promote a few vegetarian range in addition to creating awareness.

Paul's mother Mary also had breast cancer. She died shortly after an operation intended to stop the spread of the disease.

Why be vegetarian? Why cut meat from your diet? You don't have to give up meat and fish completely to get the benefits of eating less meat. But if you're considering learning more about the food industry today and about a meat free diet, these are the books that can help.

The Flexitarian Diet: The Mostly Vegetarian Way to Lose Weight, Be Healthier, Prevent Disease, and Add Years to Your Life
Buy Now

Recipes direct from the McCartney family