Guerrilla Bob is a 3D shoot'em'up game full of action with both single-player and multiplayer modes. The graphics are stunning, controls feel just right and it offers great fun.This game has cross-platform multiplayer, a large and awesome weaponry arsenal from mini-guns to explosives, unique enemies and non-stop humor.

These were the ingredients that made me buy this awesome game.

I don't usually have much free time, and whenever I do and I’m at home, I write Hubs. Though, when I’m not at home, I have a Samsung Galaxy S GT-i9000 that I enjoy playing games with, especially ones with sharp graphics throughout the small breaks I have in my day, so I had to get my hands on a game that was both fun and pleasant to my eyes - Guerrilla Bob was one of those games and oh-boy was it worth it.

Bob's story starts when he and his best friend, John, were only 10 years old. They were best friends - life brothers even. Their friendship kept them together through high school and even college, but eventually they followed different paths.
Bob decided to enroll in the military but John unfortunately followed the path of crime.
Bob was a natural soldier and earned medal after medal, went through ranks and quickly became a real flesh-and-bone national hero. On the other hand, John was jealous of Bob's and it became and obsession so big that he created a plan to make Bob look like he was a corrupt Soldier, so Bob was kicked out of the army and lost everything.

With nothing else to lose, Bob became a rebel and decided he would get revenge!

From then on, he would go by the name of Guerrilla Bob, the one-eyed cigar smoking mercenary we know.

One day, Bob found that the army had found out where John's compound was, and that they were planning to drop a nuke on his old friend. Bob managed to sabotage the plan so he'd go in by himself and hunt John and his troops down one by one.

Revenge is a dish best served cold and with a few bullets for dessert!

This is when our adventure begins.

The game's camera is set on an isometric 3D point of view that follows Bob everywhere he goes. Controls are fairly easy and straight forward so you'll be dodging bullets in no time. To the left of the screen you'll find a virtual analog controller to move Bob in any direction. To the right, you'll find another controller that looks just like the same, but it's used to aim. Basically you move your character with your left thumb and you aim at your enemies with your right. Just move and dodge their bullets while aiming at them and the bullets will start flying automatically as long as you've got the aim button pressed. This may be a bit of a headache of you have a hard time controlling two directional sticks - No problem! - Guerrilla Bob can also be played in auto-aim mode (that you can turn on/off just by pausing and changing options). In Auto-aim mode Bob with automatically aim at his closest enemy with a 0% miss rate, and your right analog controller will be replaced with button to fire your weapons. It couldn't get any easier - just dodge enemy bullets by moving Bob around while throwing mayhem at them with your right thumb.

Sound effects are very good as well, especially listening to the character's comments as bullets fly across the screen or as he picks power-ups. The main screen's theme is sort of cartoonish army soundtrack, which fits the game perfectly. The level's soundtracks are fast paced and fun while the weapon's sound effects are just awesome.

Regarding screen organization, he can see that to the bottom left and right, we'll have the character controls. In the middle of the controls, at the bottom, you'll have the arsenal that you've collected and you can quickly switch weapon by tapping the desired one. To the top right of the screen, there's a pause button while to the top left of the screen there's the information panel. There, you can see your character's face, how many points you've got and Bob's cigar which represents his health bar (Note that the cigar has a number on top of it - that's how extra lives you've got left).

Check out this video for a better idea of the game. 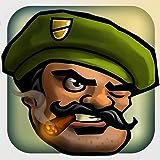 Guerrilla Bob is available for download on the Android Market. You can login with your Google account, purchase it and download it later on you phone, or you can just scan the QR Code, displayed next to each version, with your Android device.

(Don't have a QR Code reader on your device yet? Open this link on a new tab. )

Guerrilla Bob LITE
A completely FREE demo that features both Single-Player and Multiplayer modes. Great to let you feel the taste before unlocking a full version.
Android Market Link >