This is a 2 dimensional fighting game released for play station store,XBOX and Computer (pc) on November 25,2008.This game was developed by Back-Bone Entertainment.This is one of the most classic fighting games ever exist for PC,XBOX and play station.It is a remake of Street fighter II HD Remix.

This game includes Single player and multi-player modes with some interesting characters.We can learn basics of playing Fighter games . This game laid path for several fighter games which are now available for PC.This game is published by Capcom Entertainment.

Tekken 6 game is developed and published by Namco Bandai under the production of Katsuhiro Harada.Tekken means "Iron Fist" .This game was released on November 26,2007.This is the seventh game released from Tekken Series.This game has been released for Play station and XBOX first.But later,this game has spread to Computer too.It's recommended to play this game on PSP for better gameplay..

This game has released in 2007 but has graphics way too good. Moving to different places after breakage of the floors,walls etc is the newly implemented addon for this game in this game series.It has even the same theme that all fighting games have.If your health bar comes to an end,you will lose.And it is best of three.That means you have to in at least two games out of the three you play with opponent to win.

This is the most played fighting game in the world. I too love this game. I've started playing this game when i was 7 years old and i still play it.Even though it's a 2D game,one cannot simply stop playing this game after playing once.In one word,it's ADDICTIVE. This game series was developed by Ed Boon and John Tobias.First game released in this series was Mortal Kombat which was released on October 8,1992.Means this game is elder to me (Lol.).

Same theme like all other Fighting games.You have to fight with your opponent using powers and punches,kicks and lower his health Bar.Once his health bar is over,you will be the winner.The powers are different for different characters as there are many characters in this game.Latest game in this series was released on April 19,2011

Marvel vs Capcom 3: Fate of two worlds is another fantastic game developed by Capcom studios.This game consists of Characters which are developed by Capcom and there are also Marvel comic characters in this game.This is the fifth game from the series of Marvel vs Capcom.This game is released for Play station 3 and XBOX in various dates in February,2011 in various countries.

Same game theme like all the fighting games.There are different power-ups for different characters.The damage power,fatality shots are technically well designed.You can also select Spider-man,Iron Man and even Captain america as the character.

Another wonderful game published and developed by Capcom studios.It is an updated version of Street Fighter IV.This game has total sales of 2.0 Million copies worldwide.Game is officially released on April 28,2010.This game features 3D Background with 2D players.There is even online Multiplayer option included in this game.

You have to exhaust the opponent's health bar before time runs out.After the end of the time,the player who has more health will win the game.In case,if they have equal health bar after time out,then it results in "Double K.O" or a Draw game.In online battle,there are battle points,player points and many more additional features.

Which is your Favourite Game series ? 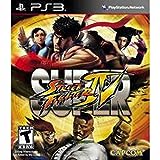