As mentioned before, this is an expansion, not a stand alone game. However, since I enjoyed the core game so much I bought an expansion and I will be reviewing it for what it brings to the core game. At this time of writing, I only have the base game and this expansion. To find out more about the base game, check out my review. I promise, this game is loads of fun.

Who doesn't love Spider-Man? It's hard not to . This set really introduces all things Spider-Man. The version of him wearing his Symbiote Suit (which is a little stronger than your vanilla Spiderman in the main game but still only costs the same to recruit), Spider Woman and the Scarlet Spider (both which focus on drawing more cards but they do cost more than 2 to Recruit). You also have Black Cat, which operates a bit more like a Villainous hero and hopes the other players are really strong, and the black sheep Moon Knight, which has one of the new keywords (Wall Crawl) but is affiliated with Marvel Knights back in Dark City. It finally allows you to play with a full Spider-Friends Hero team, which is appropriate considering the pretty awesome villains you get to face, like Kraven the Hunter, Vulture, Doppelganger, Chameleon, Hobgoblin, and more.

It might not add a new mechanic like Guardians of the Galaxy does, but it fits very thematically with the aforementioned Dark City expansion.

New Elements in the Game

Despite being a smaller expansion, there's quite a bit of new material. The most immediate new thing is the inclusion of more Spider-Friends icon. Previously, only Spider-Man in the core game had this affiliation (not including the Secret Wars expansions).

There are also two new keywords, Wall-Crawl and Feast. Wall Crawl is a beneficial ability that happens only once when you recruit that Hero. Rather than placing a Hero with Wall Crawl into your discard when you recruit them, put them face down on top of your deck. Since a lot of Spider-Friends cards have a focus in drawing more cards, you can plan on your turns and recruit new cards and put them into play immediately!

Feast is very, very bad. When you fight a Villain with Feast, you KO the top card of your deck. This can occasionally be good, but you probably won't notice it nearly as often when Feast claims your rare version of a Hero (one that costs 7 or more). A lot of the cards with Feast also have an additional function, activating a second effect is eating a 0 cost card.

You get two Villain groups with their respective Masterminds. You've got Mysterio, who has a Master Strike which gives him more 'life' (essentially forcing players to hit him more than four times). His followers, the Sinister Six, have a variety of effects to further increase their power. Sandman in particular can become very nasty, very quickly.

Carnage is just a little stronger than Mysterio's Attack Level of 8, but has some vicious backlash. All of his Tactics include Feast and they're very seldomly good for the players. Fighting him will take their toll. However, if you do plan your Wall Crawls appropriately, you can sacrifice cheap Heroes to the hungry Mastermind, saving yourself some heartache. Most of his followers (in Maximum Carnage) will also feature a similar backlash or have other highly threatening effects.

If you like Spider-Man, this is a no-brainer expansion. You get Symbiote Suit, Spider-Woman (who really isn't that connected to Spider-Man but whatever), Scarlet Spider, Black Cat, and Moon Knight, I guess (who is more valuable with the Dark City expansion). While they mesh really well with Spider-Man in the core deck, you'll really want this expansion for the Villains. Seeing the Vulture, Sandman, Kraven the Hunter, Carnage, Hobgoblin, and so much more. The villains are also very challenging as well, not requiring you to use the heroes in this set to be competitive (as Guardians of the Galaxy might). It does a really good job as a follow-up expansion to the Dark City piece with unique adversaries.

It's completely worth it for many reasons.

Assuming you have either the base Legendary game or Legendary Marvel Villains, are you interested in this expansion? 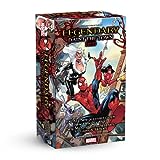 Enjoyed this review? You can check out some of my other thoughts on other tabletop games.

I've already written a considerable bit of material for the card game Munchkin, a massive selection of games that parodies various genres in a card based D&D style play full of backstabbing and manipulating your friends just to get ahead. It also has the options of tons of Custom Cards, so if you're interested in that, I've got more than a handful of cards that can spice up your games.