One of my favourite toys as a child was my brio train sets. I was fascinated by trains and loved watching Thomas the Tank engine on TV and then playing with my wooden train sets.

I loved connecting the train lines together; running the trains along the tracks and having the occasional head on train collisions.

The only part I didn’t like was the tidying up, tantrum time! 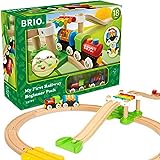 What Is A Brio Wooden Train Set?

Brio train sets are brightly coloured wooden trains with their connected carriages which can be moved, either by hand or by battery, around a wooden track, normally a figure of eight or circular arrangement.

The toy train set is ideal for children who are developing their imaginations while improving their hand eye coordination.

The tracks can be configured in many different and imaginative ways, and with the additional track pieces available, the options are limited only by the space available. I remember taking up the whole living room with my track and my mum and dad struggling to get across or around my newly created rail network.

For me the track was a type of jigsaw, fitting the pieces together to form a loop for my trains to move around. The trains offered a world of possibilities, being wooden rather than plastic they had a much better feel to them and were large enough and robust enough that they withstood my rather vigorous playing methods. I tended to put everything in my mouth and, most of my toys had bite marks all over them!

My first wooden train set was the Freight Express; I loved the magnetic connections between the train and the carriages, and took a lot of pleasure in finding other things around the house that would be attracted to the magnets. We lived near a hub for Freight trains and I was awestruck by the sheer size and number of the carriages the train was pulling and I loved to replicate this back at home with my train set.

There are also many different add on components for the railway track and train sets. There are bridges, level crossings, loading operations and even turntables to allow you train to turn round on the tracks, a much bigger list of the products can be found at the Brio site.

There is a wonderful selection of train sets available to suit your children interests and spur on their imagination. Brio train sets are loved as much for their educational value as the much as their fun to play with. Brio has recently moved to generate a greater social awareness of UNICEF’s great work with their collaborative project – Mission Set Immuno.

Join the Brio fire fighting team, with their Dalmatian rescue dogs to save the day. The set come with a light and sound fire truck and a wagon with a ladder big enough to any building, however high the danger may be!

This set comes with “Smart Tracks” which generates sounds when the train moves over them. This set is particularly impressive as it comes with a train station, a poseable figure and other interesting, thought provoking components.

A definite must for the animal lovers amongst us.

There’s plenty to do when you’re the park ranger, transporting the various animals across the savannah. Take the Lion, Cheetah and Zebra around the track and find the footprints they have left on some special sections of the track. This set offers a great introduction to wildlife for children; with some of the most amazing animals found in the African savannah.

Take the battery operated train on an Arctic adventure.

Say hello to the penguins and drive through the igloo while having your cool adventures in the Arctic. The battery powered train offers a different experience and can be easily incorporated with the other Brio train sets to create a much deeper more involved playtime experience.

This is no means an exhaustive list of the Brio Wooden train sets available and more can be found at their site.

I found my wooden train sets an awesome toy when I was a child, spending hours immersed in the worlds I created with my variety of tracks and trains. Brio offers a great, high quality toy to keep your child entertained while at the same time developing their hand eye coordination and allowing their imagination to run wild.