I really like the idea of Ships in Munchkin for some reason. Personally, I'm not a big fan of Steeds which do operate just like Ships but can also be fought (making them more versatile in game), but Ships were always easier to obtain and create a fleet (at least, in Munchkin Booty they are).

Star Munchkin's ships are a little lackluster, however. Most gain bonuses from what Race or Class you have, and there are both equippable items and one-shot items that perform better overall. This is the main reason why I created The Flag Ship card.

"It's the best in the fleet! If there's a ship with a higher bonus in play, including enhancers, this ship's bonus matches that and adds +1 to itself."

It's largely a solid, less gimmicky card. If it's the only ship in play, it's a +3. If there's a Ship with a +4, then this becomes +5. With its own effect, The Flag Ship becomes the Ship with the highest Bonus in play, making it flat out the best bonus, but it doesn't really have any effect other than that. At the same time, it benefits more from your opponents' actions. 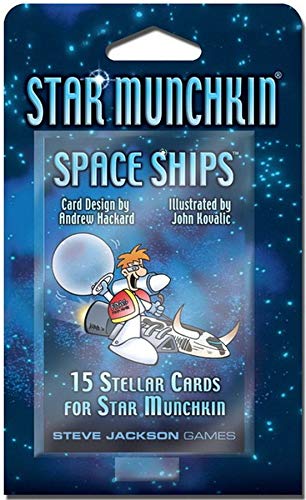 Keep in mind, however, if you add ship enhancers to this card and there's still another ship with a stronger bonus, the enhancers lose their bonus. For example, The Flag Ship has a +2 enhancer, making it initially worth +5. Another Ship in play is a total of +6. The Flag Ship now becomes a +7 and no longer gets the +2 enhancer you had earlier. It's effect, if it has one, can still be used, but The Flag Ship effect has the final say in the number bonus.

However, it's effect can be manipulated on the field. You get a Ship Enhancers in your hand but your Flag Ship doesn't benefit from them. You know what you can do? Barter them off to the individual with the strongest Ship. Yes, you'll make them stronger, but by doing so, you will as well. In addition, if you barter well, you may acquire more useable cards.

Also, if the strongest ship on the field is removed, the Flag Ship must be recalculated. It does not retain a bonus from a Ship that's no longer in play. That seems obvious, but sometimes it's best just to make it clear to avoid confusion.

Obviously this was made for Star Munchkin, specifically with the booster pack of Space Ships. I made this card after playing Munchkin Booty (which is hands down one of my all-time favorites) and acquiring the aforementioned booster pack for Star Munchkin. As I was disappointed with the few Ships available, I made another one that would be more accessible by any player. Of course I made it stronger because if you're going to design a card for a game like Munchkin, you want to make it an outlier so everyone has interest in using it.

Still, this card would roughly work for any deck but it also works very well with Munchkin Booty, considering how much of the deck is centered around Ships already.

I've got plenty more Munchkin Custom Card Ideas! You can see a list of them here.

Also, as I've spent far too money on numerous Munchkin decks and expansions, I can tell you which ones are worth it, which aren't, and why. The directory is found here.