Alisha Adkins is an author, gamer, and zombie enthusiast. She is currently pursuing her dream of writing and quietly starving to death.

Diablo Gets a Makeover

When first released, I played Diablo, Diablo 2, and Diablo 3, but after beating Diablo and getting a few characters to max level, I always lost interest. Let's face it, playing through the same acts over and over gets stale fairly quickly.

Well, Blizzard has finally instilled some new pizzazz into the Diablo series with patch 2.0 and its new expansion, Reaper of Souls.

The Auction House Is Gone

What changes come along with this expansion? Well, first, the auction house is gone. Kaput. Defunct. Quite simply, it is no more.

When I read that Blizzard would be eliminating the auction house, I was disappointed. However, now that its absence is a reality, I understand why it was removed.

To obtain gear upgrades, players are now actually forced to play the game as opposed to whiling away their hours engrossed in an economic sim. And, with the addition of "Loot 2.0" (including smart drops better tailored to the class you are playing) in the pre-expansion patch, acquiring loot is newly meaningful, fun, and addictive.

Danger at Every Turn

Act V is eerie and filled with many side quests. For instance, while in pursuit of the main story line, you will wander down the desolate streets of Westmarch. You may choose to stop and enter a variety of buildings along your way, such as stores and residences. In these mini-dungeons, carnage awaits you, and entering can trigger a diverse array of events.

Details such as these give Diablo more depth, offering a reason to stop and smell the roses (or corpses, perhaps) rather than just plunging headfirst toward the game's end.

Reaper of Souls introduces the crusader class. I have never been a fan of goody-goody classes. However, although it bears similarities to paladins in other games, I must admit that the crusader class feels bad-ass.

The crusader cuts an imposing figure. He or she has a powerful arsenal of skills, is able to use two handed weapons in one hand, and uses a flail as the signature class weapon.

Most importantly, the class is a great deal of fun to play.

The Mystic: Enchanting and Transmogrification

Enchanting allows you to reroll one property on a rare or legendary item. Only one property can be changed, but it can be rerolled repeatedly. As an example, if you don't care about gold pick up radius, you could reroll it and hope for something you like better, such as magic find.

Transmogrification, a feature pioneered in World of Warcraft, is a feature that allows you alter the look of your gear, giving it the appearance of another piece of armor or weapon of the same type. Transmogrification appearances are learned by training with the mystic or obtaining legendary or set items.

You'll have to find the mystic in Act V and bring her back to town before you can access her services. However, once you have unlocked her, she is immediately available in every town to all of your other characters.

The game's difficulty settings have also been reworked. There are now 5 modes: Normal, Hard, Expert, Master, and Torment (with includes its own sliding range of difficulty). Each step up in difficulty offers additional rewards of bonus experience, gold, and chances at better loot.

Difficulty can be changed at any time, so if you're experiencing difficulty with an encounter, you can always lower the difficulty on the fly.

With each level, each of your characters gains a point to spend in either core, offense, defense, or utility boons. For example, you are able to increase your core stat, crit chance, and health per second.

Paragon levels can be reset at any time and are a fun bonus that boosts all characters on your account, allowing veteran players to get a leg up when starting to play a new character.

Other improvements to the game center around spicing up the end-game experience.

Instead of endlessly playing the same acts, you can now play Adventure mode, a sandbox mode with random bounties and the ability to unlock Nephalim Rifts.

No longer does reaching the end-game mean entering the doldrums of repetitive play. Randomized encounters and goals, substantive loot rewards, and unending character progression through the paragon system together offer the potential here for unlimited replayability.

The bottom line is that Diablo 3: Reaper of Souls fixes a lot of the short-comings from which the series was suffering. This new rendition of Diablo is dangerously fun and addictive, so beware: it could just suck you in. 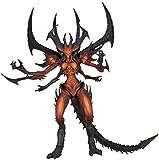