Dragonoid Colossus is a combined bakugan Mobile assault similar to Dharak Colossus. The power, size, and weight are about the same. Dragonoid colossus stands on all four legs instead of two, and has a pair of massive wings and a body structure similar to Hydranoid’s. I believe

Dragonoid Colossus has a more complex design than Dharak's mobile assault, and is more stable. This is because it has 5 parts to it instead of 3. They include Battalix Dragonoid (770G), Blasteroid (50G), Nukix gear (100G), Beamblitzer (120G), and Axator gear (80G). Together, it actually has more power than the previous Dharak colossus at 1120G’s. It can easily fall apart though, and is hard to assemble again when taken apart. It is said often to be a remake of the Maxus bakugan, but it is actually different. To give it extra power, it can also carry battle gear. 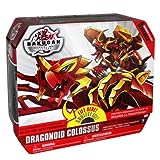 The first time Colossus Dragonoid appeared was in episode 25. Queen Serena said that it was “The orbs last defense” It went straight to Linehalt and stopped him from using the forbidden power. He also critically damaged some Neithian ships and caused them to retreat. This shows that Dragonoid Colossus is a very powerful Mobile assault.

There are many parts on Dragonoid Colossus that can act independently in a battle. Although not as powerful as other pure bakugan battle gear, it can still help when wanting extra g-power, abilities, or attribute. Currently, we are not sure if it is the same for the show, but acknowledging the fact that Dharak Colossus can do so, there is a good chance that Dragonoid Colossus can do the same. There are also a few ability cards for Dragonoid Colossus itself. When all closed parts are attached to the hub, or the main body, a Dragonoid is placed on top. When this happens, the entire thing opens and makes a very ferocious entrance into the battle field. Somehow, players like to add more power by putting another battle gear non-related to Dragon Colossus (Ex. Boomix, Airkor, Gigarth, etc.). It is considered to be a Mobile Assault vehicle, because it is a functional apparatus that is capable of moving around on its own and adding power to the bakugan that is holding in position. In stores, they are sold for around 40 dollars. You can recognize the package by the large box with a picture of Dragonoid Colossus on it. There are no prototypes or low-quality remakes at the time that are being sold, so I will guarantee you will be satisfied. I would strongly recommend it to people who want a super strong and agile warrior to add to their collection.