Barbie’s 53rd birthday prompted many memories. I was 10 when Barbie was born. The famous toy maker Mattel introduced her at the American Toy Fair in New York on March 9, 1959. Barbie impacted not only me but also the lives of my grandmother, mother, sister, daughter and grand- daughter. Each of us had or has our own special generational relationship with Barbie and those developing relationships are fun to recall.

As a child, my sister and I spent hours drawing our own princess paper dolls and then their clothes, including elaborate gowns, swim wear, play wear, and every other costume that has since been manufactured by Mattel. While Barbie made her debut when I was 10, my sister and I had no “Barbies”. We did have some less expensive dolls that we got by saving Cashmere soap wrappers. They also were small, but their waists were never as small as Barbie’s waist.

My sister designed and then created hand-sown clothing for those look like Barbie dolls. The older generation, which would have been my grandmother, used Simplicity Barbie patterns to make Barbie clothes for our dolls.

Hand and machine-sown clothes were carried and stored in a little make shift suitcase. My sister and I took them to our friends so we could play dolls with the other more lucky "real Barbie's" in town. To be sure, the handmade clothes were envied by the "real Barbie" owners.

First Barbie Bought Was For My Daughter

The first Barbie doll that I bought would have been years later for my daughter on Christmas.. Thru the years my daughter received many dolls and spent hours dressing and playing with them. They are probably carefully tucked away in her hope chest for the next generation.

While my mother never bought a Barbie for my sister or I she finally got in on the Barbie craze and gave Barbie’s camper to my daughter one year for her birthday.

To complete the 5-generational attachment to Barbie, my daughter gave my grand-daughter her first Barbie this last Christmas. While there have been countless variations and themes for the Barbies that have been created, this one was special for our family. This Barbie is Asian in her appearance and perfect for my little Thai/English grand daughter.

I can recall one special Barbie although she was never owned by anyone in my family. She was the Oreo Fun Barbie made in about 1997. I have always wondered if she was created because Barbie and Oreo cookie share March birthdays. Oreo cookie was 100 years old on March 6, 2012 and Barbie was 53 on March 9, 2012.

Will Barbie Look 62 When She Collects Social Security?

So, yes, Barbie is 53 years old in 2012 and she has created many fond memories. It looks like Barbie has at least another nine years to go before she can collect Social Security at age 62. Surely she won’t look 62 then!

Get Your Barbie Today 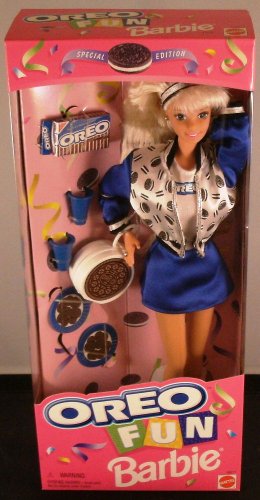