Train Simulator? Is That Even a Thing ?

Ahem, time to release my inner nerd, geek or anorak train spotter and confess all. I know, I know, Zakkers me old mate, surely as a fan of flight simulators that are all whooshy and fast, surely you were pushing your boundaries far enough with Euro Truck Simulator (review link for those that missed it). But no, you had to go one step further didn't you. A train simulator...There's not even a steering wheel to change direction, its just "Full Steam Ahead.)

Look, it's a good game, with graphics, sound and everything! And STEAM achievements! Surely that makes it interesting enough to take a sneaky peek at? Besides, trains go fast too don't you know, and judging by the sales figures and extremely active forums, this is really, really popular.

This is the age of the train

Ok, Let's Have a Look Then

Good, I am so glad you are still with me! So, lets have a bit of background first. Railworks was developed by RailSimulator.com as a successor to Rail Simulator. Released in 2009 online and in stores (remember them? That's where we used to buy games. It involved getting a bus or driving to the shop, parking, walking, talking and handling actual money to receive an actual physical product rather than just a download)! It was updated a year later and released on Steam as well as DVD. 2011 saw the release of Railworks 3: Train Simulator 2012 but effectively dropped "Railworks" from the title. Jump forward a year and Train Simulator 2013 (effectively Railworks 4) was released.

But what do you get for your pounds, euros and dollars? As it turns out quite a bit, although I am sad to say that you get far less as a new purchaser of 2013, than if you had purchased 2012, which then would have had a free upgrade to the newest version. As such it does feel like new customers are getting screwed a bit, especially as they saw fit to remove the TUTORIALS in what can be a complicated simulation to get your head around, especially with the Steam locomotives.

Being a niche subject matter of course means that the price is also high, currently 42,99€ on Steam, but GreenmanGaming and Steam often have sales on. 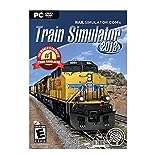 OK, lets look at what you get when you take the plunge.

The core simulation, which is incredibly accurate and includes realistic and where possible sampled sounds, functioning interior cockpits with clickable controls, realistically modeled physics and simply stunning graphics on both the stars of the show, the trains, and the locations and stations.

Controls are either by keyboard and mouse, or (don't laugh) an Xbox 360 controller, which works surprisingly well! Also worthy of note is on online global leader board with a career system and quick drive option for a quick hoon about. Interactive task lists and maps for signalling are a must, and work extremely well and fluidly.

I saved the best for last. Not only does it have a built in editor for creating your own masterpieces but it also has built in Steam Workshop functionality, which allows the community to create their own routes and mods (modifications) and host them within Steam and Train Simulator 3 for the easiest mod management I have seen!

It is so tricky to put a rating on this one. Do you love trains? Do you love simulations? If so then this is going to be a 5 out of 5 for you. If one of the above is missing in you, then it would be best to do some research before jumping in. It is expensive, and purely due to the subject matter I feel it lacks involvement and interaction, especially on longer routes. That being said, it is extremely niche, and I have been enjoying it immensely despite it's shortcomings.

DLC needs to be mentioned here. There is a LOT of free content on the Steam Workshop, but much of it relies on having at least some DLC trains or routes, and these are expensive. Currently if you want to get all 112 (ish at time of writing) DLC add ons then get ready for a shocking price to the tune of 1766.88€ or 2278.75$.

Like I said, blinkin' pricey. But on the other hand, nothing else offers what is on offer here.

Don't forget to leave a comment, I just LOVE comments!

Remember, if you need a sweet Flight simulator joystick, or HOTAS to fly with, check out my review!!

If civilian flight is you thing, check out The noobs guide to FSX or Microsoft Flight Review!!

Fancy a trip down memory lane? Why not have a look at some of the best Retro Flight Simulators from the 80's and 90's in this great roundup!!

For something rooted firmly in realism, I have also written an article on theSupermarine Spitfire.