A good snowfall means it's time to bundle up and head out to build a snowman, build a snow fort or igloo, and have a snowball fight. This can be a lot of work and your hands can get mighty cold if you don't have the right tools.

These days we have all sorts of neat gadgets and tools to make playing in the snow even more fun than ever. I have assembled some really neat gadgets I found. I found kits that make building a snowman, a snow dinosaur and a snow bear super simple. I found gadgets that make perfectly round and packed snowballs. I found a snow block maker that allows you build nice snow forts and igloos. I found a snowball blaster that allows you to launch snowballs quicker than you though imaginable. I also found a really cool 2-person snowboard. 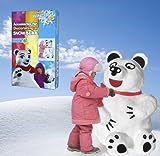 These adorable kits take snowman building to a new level. Why not make a snowbear or a snow dinosaur? You can bet all of the kids in the neighborhood will wish they had thought of that! You'll have people stopping to take photos.

Each kit comes with the basic accessories you will need. All you need to add is the snow! The pieces can be stored and reused year after year.

Why not buy several and make a whole family of snow bears or a Jurassic park full of snow dinosaurs? 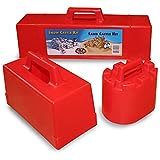 Kids love to build snow forts or snow castles. This kit allows you to quickly and easily make blocks out of snow that you can use to build the walls. Spend less time building the fort or castle and spend more time having fun playing in it! 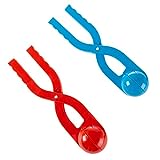 Watch the video below to see how quickly this kid made the perfect snowball.

The Snowball Maker in Action

This is the ultimate snowball fighting toy. What kid or adult wouldn't love to have one of these?! It's a combination snowball maker and launcher. It is able to shoot snowballs up to 80 feet! Anyone without one doesn't stand a chance against you.

You have to watch the video to appreciate how much fun this toy can be!

How to Build an Igloo

If we had enough snow here in Central Texas, you can bet I'd build an igloo. I have always been fascinated in structures made of snow or ice.

This book is considered a must-have if you want to build a structurally sound igloo. Another great product that is sure to help you impress the neighbors with your creation.

This kit includes all the items you need to build a cute snowman.....except the snow! What I like about this kit is that it even includes the arms. Most kits rely on you to still locate your own twigs. 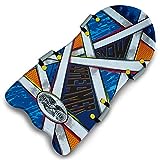 The Snow Screamer is made of lightweight foam, but built to hold two riders. Each rider has a set of sturdy handles to hold on to. The slick bottom allows for higher speeds. It is recommended for ages 5 and up. All you need now is a snowy hill.