Batman, Robin and Batgirl fight off the bad guys in Series 1 of the Pop! Heroes vinyl bobble-head toys made by Funko. Rivals of the caped crusaders try again and again to foil our heroes - Penguin, Joker, Riddler, Two-Face and Bane. Available as collectible vinyl toys and plush dolls - including Catwoman! Pop Heroes Series 4 features characters from the latest movie The Dark Knight Rises.

Classic Batman comic books and the TV series from the 1960s are the inspiration for these nostalgic toys. Funko made the Heroes Series, and all the Pop! Vinyl figures, with great attention to detail. See more superheroes & villains in Funko Pop! Heroes Series 2 and 3.

Funko POP! Heroes: 1966 Batman Complete Set of All 5 Figures Including The Batmobile 2-Pack
Great new series of "Funko Rides" for some of the characters in the collection, starting with a Batman Pop vinyl figure sitting inside a very cool Batmobile that is styled like the original TV Series.
Buy Now 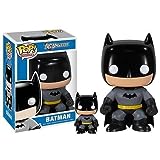 Where to buy Batman Funko Pop! Heroes - Get complete sets or individual characters

eBay has good deals on sets of these Batman toys – and scarce Comic-Con Exclusive toys, including the "Flashpoint" Batman with red eyes. Prices vary from one seller to the next, and from one day to the next, as availability changes. Check Amazon for prices of these toys until supplies run out. Then, turn to eBay to find "regular" figures and San Diego Comic-Con exclusives. 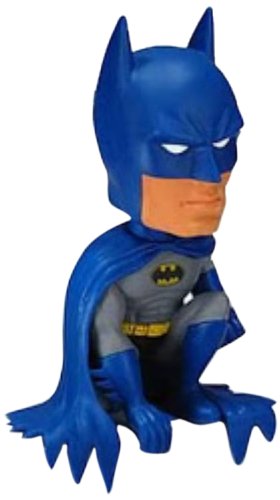 Funko Batman Computer Sitter
These "computer sitters" park themselves on the edge of computer monitors or any other kind of shelf-like ledge to keep you company while you work.
Buy Now

Hands down, I think that Batman is the best looking Funko Plushie. He's much bigger than it looks in pictures - 8 inches to the top of his pointed ears. With sale prices happening now, it's very easy grab a few of them, and Batman will look very cool sitting in the playroom with the kids.

Funko also makes Batman Plushie Toys of all the characters. These are really the best plushies in the whole series. I mean look at the Penguin! - the details are excellent. The Joker looks just like Cesar Romero - the actor in the Classic 1966 TV Series. Julie Newmar and Eartha Kitt as Catwoman.

Check online for discounts and clearance prices every month for toys, games and books. For example, the Disney Pop! figures go for $12.50 at the Disney store. Barnes & Noble sells them at $9 each, sometimes discounted to only $5 each.

'Vinyl with an edge'

Who is your favorite Funko Batman Pop! character?

To the Bat Cave - How do you like these FUNko toys?