A page for old school gamers who enjoy playing retro video game systems such as the Atari, NES, Sega Genesis, SNES and N64.

I really enjoy playing old skool video games for systems such as the Sega Genesis and Super Nintendo, my 2 all time favorite systems. My goal is to promote the vintage video games that we played in the past and hopefully still play occasionally. Those who are in their late 20's and older can really relate to this lens. I started out on the original NES system when I was about 8, and at that time, I was blown away with how awesome it was. Who could have known that in 25 years what the graphics and game options would be? I remember blowing on the old NES carts and reinserting the game until the system worked and breaking out the rubbing alcohol with the q-tip to clean the contacts. Now that I'm older I realize that blowing on the games puts moisture and corrodes the contacts, so don't do it. I was so pumped up when the Sega Genesis and Super Nintendo came out because they functioned better with minimal blowing, cleaning, and better graphics without having to wiggle the game around until you found that special spot. Those were the days I remember with much fondness and spent a great deal of time playing my favorite games. My 2 favorite retro systems of all time are the Super Nintendo and the Sega Genesis with the Sega getting the overall edge.

My 3 boys are aces at the Nintendo Gamecube, PS2, PS3, Nintendo Wii, PS4 and Xbox 360 and and yet where I used to think I was a pretty good gamer, in modern games, I'm not as good as I'd like to be. Don't get me wrong, I enjoy trying to play the Wii and Playstation 3 but primarily keep playing my old systems.

I'm a diehard Nintendo fan and was a huge Sega fan as well. I was heartbroken when Sega closed up shop in regards to making systems though they still have involvement in producing games, etc. I have dozens of favorite games ranging from rpg's, shooters, action and adventure, strategy, etc. Some of my favorite games among various systems: All TMNT games but like Turtles 2 for the NES and Turtles IV for the SNES the best, all Super Mario Bros 1 2 and 3 for the NES, Super Mario World and Super Mario RPG for the Super Nintendo, Dune the Battle for Arrakis for the Sega Genesis, Golden Axe 1 and 2 for the Sega Genesis, Super Metroid for the SNES, World Driver GT for the N64, Bass Hunter for the N64, Starcraft, Goldeneye and Super Smash Bros for the Nintendo 64 and Phantasy Star's, Dragon Warriors, Zelda games, and Sonic the Hedgehog series. This is just a small percentage of some of the games I played the most and probably left a few hundred off the list:) I also remember playing on the Atari 2600 and 5200 system at my friend's home but never had an atari growing up.

Please feel free to post here, contact me, suggest duels, etc. I have another blog where little Howie and I tackle old school games together to see how we do. May 27th, we just beat Golden Axe 2 on the Sega Genesis. If you're a gamer and love old video games, check that out as well since it will interest you. I welcome any and all comments and feedback.

All photos were taken by me.

My photos of Games, etc 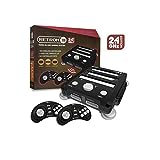 Hyperkin Retron 3 Video Game System for NES/SNES/GENESIS - Gray
I have this color of system.
Buy Now

Retron3 system for playing the NES, SNES and Sega Genesis - I prefer the older systems but I do have a Retron 3 for one of the boy's TV's, saves space on all th

Be warned that not all games will play in every system, I would say about 90 percent play flawlessly. The sound is not quite the same as the original systems . The game pads aka controllers are not the best made so I would use original controllers and can be used on the Retron 3, they are compatible. It is worth the money you save if you have limited space and are tired of hooking up 3 different systems with a ton of cords and cables all over the place. Again, if you buy a multi system I recommend the Retron 3 and not the FC 3. The FC 3 controllers are junk and can't use original controllers that are better made.

Vote for your favorite gaming system. I want to know what everyone thinks.

Poll for Gamers who are stuck in a game/level

If stuck in a game and can't advance what would you do?

Sonic The Hedgehog - Classic Sonic 9'' Plush
We have a couple Plush Sonics and Tails as well.
Buy Now