Linda Hahn is an excellent writer and a passable researcher! She has a blog, too!

A Matter Of Choice

The sorting hat of Harry Potter fame stays in the headmaster's office until it is called upon once a year to decide where the new boys will go. It originally belonged to Gryffindor, one of four founders of the school. To keep the original intent of the founders alive, they bewitched the hat, making it a thinking magical hat.

It could talk as well, and sometimes would foretell the future. And there's a face in it when you look closely enough, that is how it talks. It sang a new song of its own creation to introduce the sorting ceremony each year. Then each boy would wear the hat and be decided according to his own disposition and history. 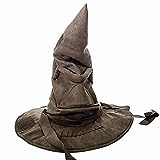 NECA Harry Potter Talking Sorting Hat Plush
I love this stylish witch's hat. It has great character. After all these years, I am still enamoured of this Sorting Hat.
Buy Now

A Well Used Hat With Personality

I love the sorting hat name and the look, all beat up and patched, obviously a well loved possession. Those things that are cherished and used often have deeper meaning. They are bound to their owners as if by blood. And so it is with Gryffindor's sorting hat. It is history bound to the present. It is the evolution of past into present and the portal to the future.

With its pointy top, it is obviously a witch's hat, but with such care and individuality attached and bred in, sewn and lovingly patched into the garment, the sorting hat is a thing of wonder. It is a decisive and powerful hat and something in me craves that. I want one very much or my collection can never be complete.

I love witches hats and have many of my own. They are the classic symbols of a witch's independence of thought and the freedom to do as they will. Every woman and girl should own a couple of them. When you put on the hat, your thoughts start changing, moving and wriggling around as though they had a mind of their own. Your thoughts become free and lofty, scary and right. You begin to wonder how you've lived so long without this sacred knowledge contained within the witch's hat.

The witch's hat is quite distinctive yet also classic; it is flamboyant yet earthbound. This simple hat is a connection to all the ancient ones, their beliefs and their religion. These beliefs and religion continue today in many forms. The most important belief is freedom of thought.

This witch's sorting hat via Harry Potter is great. It's got a little slouch that gives it a bit of an attitude. But it is not a highfalutin feeling; this hat is much more earthbound and working class. It has an everyday feel to it which is very comfortable and comforting. No wonder I find it so appealing! It's my family history contained in one little hat.

It is important to remember that witches are really just like other people - some of them are flashy and like to flash the bling around and others are playful and inclined to happy mischief when they are being good citizens. But be careful when they are being a little bad.

Whoa! A Cake Of The Sorting Hat Sort.