Although Lego previously released some DC Comic Characters, they had never created an entire DC Super Hero Lego series and they had never produced Superman, Superwoman, Captain Marvel, Green Arrow or Green Lantern Lego sets. These were all favorite DC Comics characters that were not but finally are available in Lego form.

On this page, discover some of these fantastic DC Universe Super Heroes Lego sets. If you are a Lego and a super hero fan, you will not be disappointed. 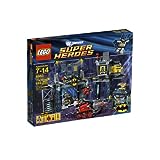 LEGO Super Heroes The Batcave 6860
The Batcave also features an Elevator function that transforms Bruce Wayne into Batman. How COOL is that?
Buy Now

The first Batman Set in the new superhero Lego series.

Batman teams up with his trusted sidekick Robin as Bane breaks into the Batcave to save Poison Ivy. You must help Batman And Robin foil Bane's attempt in breaking Poison Ivy free and put him back in prison!

As well as the batcave, you will also get Banes famous drill tank, the bat-cycle, a trusty pair of handcuffs, binoculars and 2 weapons.

Which Is Your Favorite Lego Super Hero?

Which Is Your Favorite Lego Super Hero?

Batman Is back in style with his brand new powered up suit. As usual, Batman is putting his detective skills to good use in the hopes of tracking down his rival enemy, The Joker. Morph two swords together to create a super bat-sword and be ready to use those quick and witty martial art abilities to capture the smiley clown The Joker and send him back to prison were he belongs.

In this Ultrabuild Batman Set you will get all the flexible parts you need to create your own Batman figure that stands 8 inchs (20cm) tall. You Can build bigger figures with the new Lego design high friction joints.

The Lego Joker is causing havoc through the streets of Gotham City and of course the only person up to the task of putting a stop to the Joker is the Lego Batman. He might find it tougher this time though because the clown is ready with force wearing his powered up suit and also the new Joker Blaster to shoot venom, smoke bombs, laughing gas and stunning blasts. Will he prove that Batman has finally met his match?

This set stands over 7 inches or 18 cms tall. These Ultrabuild sets are new, unique building systems designed by the Lego Group and are not like traditional Lego building blocks.

LEGO Ultrabuild The Joker 4527
As above this set can be combined with the Batman Ultrabuild Set to make bigger Figures.
Buy Now

The Green Lantern has come out of hiding to show off his new super powered suit and of course his fancy green power ring. As you already know, this ring gives the Green Lantern his remarkable powers including the ability to fly through space, to speak different alien languages and to conjur up objects of solid-energy like the infamous Morning Star. You know you are safe once the Green Lantern is around.

This Lego Green Lantern Ultrabuild Set will stand at over 7 inches (18 cms) tall. These Ultrabuild sets are new and unique building systems designed by the Lego group and are not like traditional Lego building blocks.

LEGO Ultrabuild Green Lantern 4528
As with the other two Lego DC Universe Ultrabuild Super Heroes sets, this can be combined with either one to make a bigger Green Lantern Lego Figure.
Buy Now

Superman's most jealous enemy has designed and built a robot that`s powered by Superman's most feared substance KRYPTONITE. The KRYPTONITE powered robot just captured Wonder Woman. Will Superman be able to avoid the full force off Luthor's kryptonite killing Machine and save Wonder Woman?

Lego and Marvel started 2012 with a contest at the San Diego Comic Con at which you could win limited edition minifugures. Minifigures were given away as prizes to 1,000 people. Included in the giveaway were Black Spider-man, Phoenix, Shazam! and Bizzarro.

This new Lego Batman 2 Video Game is based upon the Lego DC Super Heroes. It will not only feature Batman and Robin but they will be joined by the other famous super heroes from the Lego DC Universe theme including Superman, Wonder Woman and the Green Lantern.

Go head to head with Lex Luthor, the Joker and all the notorius underlords who are trying to destroy Gotham City. Fans of Lego Batman of any age will enjoy playing this game.

You can explore more areas of Gotham City than ever before and explore all the superhero abilities with this fun new Lego game.