Where to Buy the Princess Cadence Doll

This new Princess Cadence doll is adorable! She is Princess Celestia's niece and the doll is set for her wedding day.

The doll even says "Today is my wedding day."

She is a princess pony bride and her wings light up, plus you can brush her hair. Princess Cadence is from the Canterlot Wedding episode and is of course marrying Shining Armor, who is Twilight Sparkle's brother. Her full name is Princess Mi Amore Cadenza.

She is the princess of the Crystal Empire. 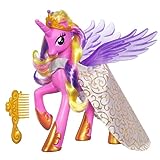 My Little Pony Princess Cadance
This is not the Queen of the changelings! It is actually Princess Cadence - Princess of the Crystal Empire.
Buy Now 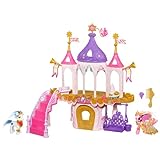 Finding Out More About Princess Cadence

Hasbro's hit cartoon series My Little Pony has become extremely popular, due in large part to the amazing creativity of Lauren Faust. Over the past four seasons, the characters in Ponyville became household names and today, one interesting one is Princess Cadence.

The Wedding Is Significant

Shining Armor and Princess Cadence make an adorable couple. Her light pink coat and purple accents blends well with Shining Armor's blue and white colors. When she is married, she is astoundingly cute in the long trained wedding gown. Her cutie mark is a blue heart with lace around it. All ponies have a special cutie mark in the series that signify aspects of their destiny. One might stop to consider her special cutie mark being blue like the colors of her future love, Shining Armor. In a unique way, she was already carrying Shining Armor's heart along with her because he was ultimately her destiny. However, the blue heart she carries turns out to be another symbol also, the real Crystal Heart that makes her who she is. In season three, she finds the real Crystal Heart and when she touches it, he cutie mark lights up at the same time.

Many fans wonder if Princess Cadence is the true crystal princess that lived over one thousand years earlier. One clue is her cutie mark lighting up whenever she touches the Crystal Heart. The story behind her and the other Ponyville characters is quite fantastic and sets a great example for young girls about how to be a true friend. Many kids enjoy the series and some adults do as well.

Are you Getting Princess Cadence for Someone?