Fans of the Simpsons are really going to love this spectacular new Lego set: The Simpsons House. Lego set number 71006, contains 2,523 pieces and is a replica of the Simpsons house that you can build from Lego. I love the fact that Lego made this a large set so that they could include lots details on the interior as well as the exterior of the house.

This set includes six minifigures: Homer, Marge, Bart, Lisa, Maggie and Ned Flanders as shown in the photo gallery below. However, Lego released more collectible minifigures than those included with this set so you can add build a bigger collection of minifigs for your set or you can just collect the minifigs.

I'm not really sure which idea was born first, the Lego set or the Simpsons Lego Spectacular, and expect they might actually have been planned together although the building set was released ahead of the television program.

The Lego-themed television special, which is being called both the Lego Spectacular and Brick Like Me, airs on May 4, 2014. The show promises to be fun for Simpsons and Lego fans.

There is a second Simpsons set, called the Kwik-E-Mart, set 71016. See what it looks like and read more below.

Click here to read more about or to buy The Simpsons Lego on Amazon.

The Simpsons House in Lego - A photo gallery. 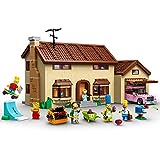 LEGO Simpsons 71006 The Simpsons House
Here, it is, Lego's The Simpson House on Amazon. You can click on the title link (above) or the orange button (below) to learn more about Lego set 71006.
Buy Now 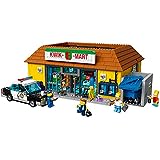 Check out the second Simpson's Lego set. It is set number 71016 called Lego The Kwik-E-Mart, which seems perfect for the Simpsons theme. It's a fairly big set, with 2179 pieces that represents your corner store. It includes well-stocked store shelves and six mini-figures as well as a police car. Fun compliment for your Simpson's house.

This picture illustrates just three Lego minifigures from The Simpsons collection that are not included with the house set: Mr. Burns, Apu Nahasapeemapetilon and Ralph Wiggum. You can click the orange Buy Now button to see Amazon's complete collection of Simpsons Lego without actually being obliged to buy anything.

Check out the Simpsons minifigures on Amazon.com

The Simpsons LEGO Spectacular Show - This program is titled Brick Like Me.

Did You Watch the Simpsons Lego Television Special?

POLL: Did You Watch the Simpsons Lego Television Special?