The Benefits Of Teaching Children Music With Educational Toys

One idea of great gifts for kids are musical toy instruments. Not only are toy instruments fun to play with, but are the perfect way to introduce your child to music or perhaps even get him or her interested in playing a musical instrument.

Studies have shown that when children play a musical instrument, it can help them learn discipline and even get better grades in their other subjects -- particularly in math, science and languages. Indeed, one study showed that students who were involved in some kind of musical ensemble or took musical lessons tended to score higher on their SATs or college entrance exams than the national average in the United States.

As a musician myself, I can definitely say that learning an instrument has made me a much more focused and creative person. Having come from a musical family (my mother plays piano, my father plays guitar and my late grandfather played violin), I was surrounded by music while growing up and began playing piano when I was only 3 years old. At 9, I began studying the flute, then added saxophone and clarinet to my repertoire in high school in college. These days, the flute is my main instrument (as you can see from my profile picture), but I still treasure all of those years that I played in musical ensembles.

When you have to practice every day and play with a large group of people, it teaches you discipline and teamwork -- and is also a great way to make friends. While I thrived in music, I also did well in my other classes because music taught me how to be prepared.

Giving your child a toy instrument for a birthday or Christmas could be the gift that keeps on giving. While most of these toys only resemble real instruments, they could be just what sparks your children's introduction to music ... which could benefit them for the rest of their lives.

Concerto For A Toy Piano 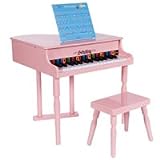 Articles On How Music Benefits Children

Learning To Play The Piano

The great thing about the piano is that it's really easy to get a sound out of. To play the piano well obviously takes a lot of work, but in the meantime, even a baby can bang on the keys and have fun making some noise!

Toy pianos come in all shapes and sizes, with some resembling a real piano more than others. The pianos geared toward toddlers usually have colorful keys and act a little like radios, where if you press on a key, a particular song will be played. More sophisticated toy pianos often come with color-coded or labeled notes, and an accompanying booklet, so that young pianists can learn some very basic songs.

Music lessons can be quite expensive, so starting out with a toy piano is a wonderful introduction. Having taught music myself, kids are usually thrilled when they learn their first song, even if it's just something simple like "Mary Had A Little Lamb." It gives them a sense of accomplishment and some welcome attention if they get an enthusiastic audience to listen.

As for younger kids, I've found that they just love listening to the different sounds that a piano makes. Last year, while visiting my friend, her then 2-year-old son proudly showed me his toy piano -- and he was thrilled when I actually made music on it! He kept pleading with me, "Again, again, more piano!" because he was so enthralled by its tinkly sound. We had a great time playing "duets" together where I'd play simple songs and he'd pound on the keys!

Learning To Play the Violin

Even though the violin is small to start with, young musicians are usually taught to play on student violins, which are even smaller instruments. When a child is given a toy violin, he or she can at least get an idea of what it's like to hold a violin and use a bow, and they can learn what string instruments sound like.

Toy violins are colorful and make for lively, enjoyable gifts. You can see how much fun the little boy is having in the video!

One of the things my grandfather loved about his violin was that it was easy for him to take it places. He could play at family parties, weddings, even at the park.

Making Music On A Toy Sax 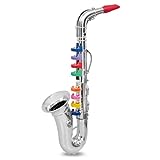 I never intended to become a sax player. However, when I wanted to join the jazz band in the 8th grade, my music teacher told me that flutes weren't allowed in (which was ridiculous, but I digress). So I learned the tenor saxophone and was able to join.

What I love about the sax is that it's so cool looking -- it makes you feel like a rock star! Same goes for these toy saxophones. Many are set up so that kids can press the keys and learn some simple songs. It can also teach them breath control and mouth position (embouchure).

If you give your child a toy saxophone this Christmas, you might also want to introduce him to some jazz albums since the sax is often used in jazz, as well as rock. This way, he or she can get an idea of what a real saxophone sounds like.

Learning To Play The Drums

Drums are so appropriate for Christmas; think of the wooden soldiers playing them or the "Little Drummer Boy." Also, kids love them! They can bang on them and pound them, and have hours of fun. Think how many people you know whose little ones love banging on pots and pans with a spoon. A toy drum is a definite upgrade!

Toy drums are also useful because they can be a great way to introduce your child to learning rhythms. One fun game that the whole family can play is to have someone beat out a rhythm on the drum and then have everyone else try to mimic it. The rhythms should get faster and more complicated, and whoever is left standing (or drumming, in this case) wins a prize. 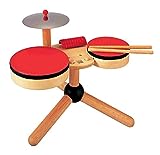 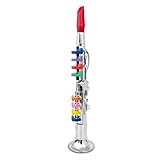