A Healthy Alternative to Salt

Why a Salt Alternative

Why do we need a salt alternative. People are addicted to the taste of salt. Although if you give salt or salt in water to a baby you will probably make him or her cry. Then you can tell this baby that he will be eating a lot more of this and it may make him fat and cause lots of health problems.

Now I have a very radical idea about health. My idea is to eat food or foods and not eat non-foods. Now Michael Jackson ate very healthy foods but ate non-foods and it killed him. He was the king of pop. The king of rock, Elvis Presley, also died of eating non-foods. This also applies to Bruce Lee, Whitney Houston, Brittany Murphy and Heath Ledger.

Now I say that salt is not a food. It is a non-food. More on this later. Now take 5 minutes to watch this video by the researcher Michael Greger M.D. that says that salt kills over 1,000 Americans per day. 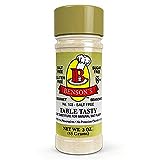 Here is a list of many things bad about salt when it comes to health. See How to Live 30 Years Longer.

Also webMD gets a million visitors a day. Before an article is published it is reviewed by many doctors. They say that if you start smoking and quit taking salt you will be healthier. People think that this is misprint. The point is that consuming salt is worse for you than smoking. Consuming salt causes high blood pressure and osteoporosis. See Cutting Salt as Good as Quitting Smoking.

Now we go to the book-- The Miracle of Fasting: Proven Throughout History for Physical, Mental, & Spiritual Rejuvenation by Patricia Bragg and Paul C. Bragg N.D., PhD. Here are some testimonials about this book. Thank you Paul and Patricia Bragg [father and daughter] for my simple, easy-to-follow health program. You make my days healthy and happy by Clint Eastwood.

I have followed Patricia Bragg's healthy lifestyle teachings & Bragg Apple Cider Vinegar since I was 10 years old. It keeps me and voice healthy and strong.

Michael Greger M.D. and Joel Fuhrman M.D. both say that salt is bad for you but neither say it is not a food. This book says:

Salt is not a food! There is no more justification for its culinary use than there is for potassium chloride, calcium chloride, barium chloride or any other chemicals on the druggist's shelf.

So if salt is not a food and has no calories, how does it make you fat (slang for overweight)? It causes you to retain water.

Before I became a chemist for the U.S. federal government I would make mixtures of chemicals as a teen for pyrotechnics (fireworks). I used potassium nitrate (saltpeter) that is the main ingredient. All these chemicals that are mentioned above are salts that is what you get when you mix a acid with a base. Salt is short for common table salt. It is sodium chloride that you get when mix the most powerful acid, hydrochloric acid, and the most powerful base, sodium hydroxide.

Paul C. Bragg created this salt alternative. He had the first health food store and health food restaurant in America and introduced tomato and pineapple juice and juicing to the country. So what is a food? Foods are plants and animals. Biology teaches that plants create foods out of water, air, minerals and sunlight. This is why soil or dirt or manure is good for plants but humans should not eat dirt or manure.

Now the U.S. government or doctors do not recognize the difference between consuming inorganic minerals like found in dirt or organic minerals as found in food. What is food? Plants, animals or living things. There are 5 different living things. For example mushrooms are not plants. They are fungus or plural fungi. These existed before organic growing and they come from inorganic chemistry (chemistry for short) and organic chemistry.

Organic minerals are very vital in keeping us alive and well.

For years I have heard peo­ple say that cer­tain waters were rich in all the minerals. What min­er­als are they talk­ing about? Inor­ganic or organic? These are inor­ganic and they are bur­den­ing their bod­ies with these inert min­er­als, which may cause the devel­op­ment of stones in the kid­neys, gall­blad­der and stone-like acid crys­tals in the arter­ies, veins, and other parts of the body.

I was reared in Vir­ginia where the drink­ing water is called hard water. It is heav­ily sat­u­rated with inor­ganic min­er­als, espe­cially sodium, iron and cal­cium. I saw many of my elders die of kid­ney trou­bles. Nearly all the peo­ple were pre­ma­turely old because the inor­ganic min­er­als would col­lect on the inner walls of their arteries and veins, caus­ing many to die from hard­en­ing of the arter­ies, strokes and heart attacks.

Taking more iron than your body needs can cause serious medical problems.

But there is no warning like this with iron rich food. In fact some people who weigh over 500 pounds eat a huge amount of iron but it does not hurt them. The reason that I went into all this is that this alternative is food but has huge amounts of sodium like salt, soy sauce or tamari but it contains no salt. The problem with salt is too much sodium but there is a huge difference.

Also because of this they suggest you use distilled water instead of spring water. Many people and doctors say that sleep is bad for you. But they do not know that they are saying it. To sleep you need to do something else that people say is bad for you. So many say that fasting is bad for you. When you stop a fast it is called to break a fast. The first meal that you eat after sleeping is called "break-fast."

You can read my article The Many Benefits of Fasting. To learn more about the water you drink read Drinking Water Can Cripple You or Make You Blind. Also I believe in drinking water when you fast but not at other times. You can use that water that is not a food to make a food. You can use to make green tea that is very healthy for you and sweeten it with stevia. Water is defined as a tasteless substance. See 17 Health Benefits of Green Tea.

Now I knew about this product but I was reminded of it after going to a program with Prem Rawat who is a teacher and speaker in Long Beach, CA in March 2016. Afterwards we ate at a heath food store/restaurant in Palm Springs. Google says:

This health food restaurant had on the tables black pepper that you turn to grind it and also had bottles that spray a mist of Bragg Natural Liquid Aminos that are made from non-GMO soybeans. Now you can get all the sodium that you need from fruits and vegetables, but this is for people addicted to salt. They went through a lot of trouble to create a food that tastes like salt or soy sauce.

Some people say that you need salt since you need sodium. This like saying that since you need iron, you need to eat rust and since you need calcium then you need to eat chalk. Salt is not a food and has no calories but makes you fat. It causes you to retain water and it cause you to eat more food. That is why the companies love to put salt in all processed foods including sweets. Salt does not taste good. It tastes salty. No one likes the taste of pure salt or salt water.

Daily Mail has an article called Why salt is addictive: It stimulates the brain cells just like cigarettes and hard drugs. It says:

But researchers claim that salt is addictive in the same way as cigarettes or hard drugs, with the craving triggering the same genes, brain cells and brain connections.

When the rodents were in need of salt, brain cells made proteins more usually linked to addiction to substances such as heroin, cocaine and nicotine.

But when marijuana is made legal and they start putting it in foods, you will have another addictive drug that causes you to eat more food. They investigated the salt licks that animals like to eat. They all have no sodium chloride.

Above I mention Joel Fuhrman M.D. who is like a living legend. He does not use drugs or medications. In fact he said that drugs work or do not work like this. If a red light goes on in a car, you can remove the bulb and it will not light up. That is how drugs work. Hear him explain it when he was on the Dr. Oz TV show. See Why Medications Do Not Work.

So what does he use? Why does the bible have 74 references to fasting? It was the main form of healing among Jews at that time. So Dr. Fuhrman uses fasting and a change in diet. His nutritarian diet emphasizes foods that are nutrient dense. To heal and prevent diseases he says you should eat G--BOMBS. It is an acronym that stands for greens, beans, onions, mushrooms (that are a fungus), berries and seeds/nuts.

Before he was a doctor his mother was fasted by Dr. Shelton N.D., D.C. Then he broke his foot and doctors said he would never skate again. So Dr. Shelton fasted him for longer than Jesus fasted (40 days). He won ice skating medals and became a doctor. He also developed the ANDI (aggregate nutrient density index) scale used by Whole Foods markets. Its highest food is kale with a score of 1,000.

Why can't you drink sea water or ocean water if you are dying of thirst. The salt in it will make you more dehydrated.

How to Get Two Bottles of Bragg's Liquid Aminos for the Price of One Bottle | There is no salt in this product.