How Much Chocolate is Needed for Heart Disease Prevention?

Chocolate (in Moderation) Is Good for Your Heart

A Meta-Analysis of Seven Independent Studies

Many studies have been done that have reported the positive health and psychological effects of chocolate consumption. Some of these studies have focused on the ability of chocolate to reduce heart disease and stroke. In August of 2011, a meta-analysis was published covering seven of these studies, including over 110,000 people from Europe and North America. Conclusions from this report allow us to make some general conclusions about the positive health effects of chocolate consumption (1).

Six of the studies included on European and North American Caucasians. So, it is interesting to speculate, would the conclusions reached by the meta-analysis be pertinent for other populations that have different genetic and cultural backgrounds? 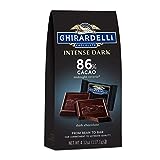 So, How Much Chocolate for Increasing Heart Health?

Study 1: once a week or more

Study 2: once a week or more

Study 3: more than once a week

Study 5: more than one per day

(See below for a discussion of how much chocolate is needed per day......)

Chocolate contains common plant chemicals known as flavonoids. Also known as polyphenols, some of these, like quercetin, are known to have antioxidant properties that can benefit and combat diseases related to aging. The link to quercetin explains why antioxidants can have an effect to help prevent atherosclerosis, or hardening of the arteries.

Heal Your Heart with Wine and Chocolate: ...and 99 Other Ways Women Can Protect Their Hearts
Heart disease is the number 1 health threat for women. Find many different ways to reduce the risk of heart disease, including intake of chocolate and wine.
Buy Now

How Much Chocolate Is Enough?

With all of these various criteria, one can at least conclude that once a week or more is needed to confer the health benefits. Study six is the most exact criteria for consumption, so I would assume that 7.5 grams of chocolate per day is a good recommendation. You could consume 7 x 7.5 = 52.5 grams once a week or spread it out. This weekly amount is equivalent to eating four and a half pieces of Toblerone Milk Chocolate with Honey and Almond Nougat. You also get an extra 43 calories for each piece you eat, about half of which are from fat. (2)

The forms of chocolate included in the studies included chocolate drinks, bars and snacks. The various types of snacks included desserts, supplements, confections and candy bars. There was no distinction between types of chocolate, white or dark, in the seven studies.

However, polyphenols are more prevalent in the dark chocolates, less so in milk chocolates and nonexistent in white chocolates. (3) So there should be an adjustment in studies for the relative polyphenol content when reporting the effects of chocolate on health.